Aadhaar Verdict Has Got Its Share of Memes on Twitter, Check Funny Tweets After Supreme Court Ruling

The Aadhaar verdict is trending on social media and people have some hilarious reactions to give. Check some of the jokes and memes on Aadhaar verdict. 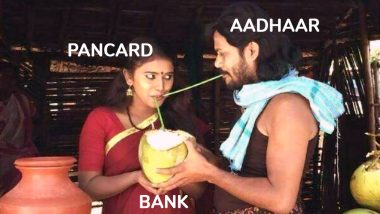 The Supreme Court ruling on Aadhaar has not made the unique identity number mandatory for a number of services. Justice Chandrachud of SC called Aadhaar unconstitutional. After a lot of initial hullaballoo about linking Aadhaar to Pan and bank accounts, followed by the data breach, the judges upheld the Constitutional validity of the Aadhaar Act. Aadhaar is also not mandatory for school admissions and competitive exams as said earlier. Soon as the judgment came in, social media was abuzz with a lot of reactions, including some jokes and memes of course. Aadhaar Verdict: List of Services for Which UIDAI Number Is Mandatory and for Those It’s Not.

The Aadhaar verdict is trending on social media and people have some hilarious reactions to give. Although Aadhar linking with the bank and mobile numbers is not mandatory, it still needs to be linked with Permanent Account Number (PAN) and Income Tax Returns. The decision is thus being made fun off by people on Twitter.

Check some of the jokes and memes on Aadhaar verdict:

When dealing with Government, use Aadhaar card.

One daunting question on everyone's mind

Aadhaar was also made mandatory to link to several welfare schemes and a failure to do so would disable their bank operations. So a lot of people already did link their Aadhar numbers with their banks, mutual funds, DMAT accounts.

(The above story first appeared on LatestLY on Sep 26, 2018 02:12 PM IST. For more news and updates on politics, world, sports, entertainment and lifestyle, log on to our website latestly.com).