Now a viral challenge is surfacing on the internet in a bid to raise money. It is called the ‘Koala Challenge.’ Yes, the same name which went viral in 2019 has resurfaced, but this time for a cause. The challenge is to raise money for the wildfire victims. 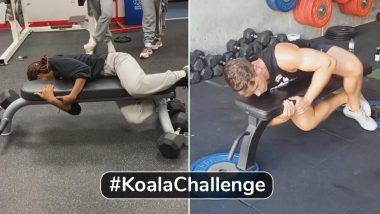 Australia’s bushfire crisis is shockingly bad, and it appears to deteriorate each passing day. More communities are evacuating. As per the latest report, another firefighter died battling Victoria blaze. The count of evacuation, deaths and destructions are not stopping, and the fire continues across Australia. The rest of the world, who are witnessing this disheartening situation is calling for climate change action and Australia bushfire donations, to help the victims. Now a viral challenge is surfacing on the internet in a bid to raise money. It is called the ‘Koala Challenge.’ Yes, the same name which went viral in 2019 has resurfaced, but this time for a cause. The challenge is to raise money for the wildfire victims, as people participate and upload their videos on social media.

The Koala Challenge was originated in Australia, sometime around February, 2019. The challenge involved one person climbing (like the Koalas) on their partner (a tree). One had to go around the tree (person) without falling or touching the ground to complete the challenge. It was a fun viral trend, indeed. But this one calls for seriousness. According to media reports, FITFAID, a fitness beverage company, has challenged people to participate in the Koala Challenge and help raise money for the Australian fire victims. For every video, posted on social media of anyone completing the challenge, the company will donate $5. Here’s How You Can Donate and Help Those Affected by Destructive Australian Wildfires.

The twits in the recent viral Koala Challenge that instead of a human, you need to twirl on a workout bench. So for this challenge, one has to lay flat on top of a workout bench with ever touching the floor. If done appropriately, you will be hanging from the underneath of the seat, looking just like a relaxed Koala. The challenge is a huge deal of strength, but many have succeeded and hence raised money for the victims of the Australian wildfires. Australia Bushfire Crisis Fuels Mass Protests Demanding Immediate Action on Climate Change.

Jack doing the #koalachallenge at CFP and making it look easy! #crossfitprototype

A post shared by Personal Trainer Westborough (@crossfitprototype) on Jan 11, 2020 at 7:10am PST

Because I like doing dumb shit and I blame @mathewfras 😂 #koalachallenge

It is No Easy, But Nice Try!

The #koalachallenge 💪🏼🐨 @fitaidaus will donate $5 to the efforts of the Australian wildlife protective services, firefighters and victims for every shared video of the koala challenge @fitaid get around it! . . . #SagittaCrossfit #CrossFit #focus #fitness @sagittacrossfit

It is really a nice initiative to bring back the challenge for the place which initially started it for fun. According to estimates, 1 billion animals have died in Australian bushfires that includes 25,000 koalas. The fire on the Kangaroo Island, which was once considered a koala safe-haven because its population had escaped a devastating chlamydia epidemic, was described as “virtually unstoppable,” by the firefighters. If the viral Koala Challenge is difficult for you, then there are plenty of other organisation which are accepting donations to help the fire victims.

(The above story first appeared on LatestLY on Jan 12, 2020 09:50 AM IST. For more news and updates on politics, world, sports, entertainment and lifestyle, log on to our website latestly.com).