A dog named, Taylor is going viral for rescuing koalas sniffing their poops. Along with Taylor, meet two other canines who have helped saving animals from the Australia bushfires. The videos and pictures will melt your heart. 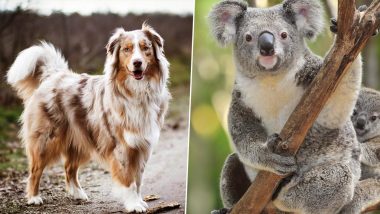 Australia is battling with the raging wildfires. Over a billion animals have died in the fires, which so far have destroyed more than 1,700 homes in New South Wales, Victoria and South Australia. Firefighters are working round the clock to save as many lives they can, and the dogs are being trained in the rescue as well. Yes, among all the firefighters, there have been four-legged furry heroes employed with a job of their own. And it is a blessing to see these dogs, helping animals from the wildfires. A dog named, Taylor is going viral for rescuing koalas sniffing their poops. People cannot stop appreciating the good girl for doing so great. Along with Taylor, meet two other canines who have helped saving animals from the Australia bushfires. The videos and pictures will melt your heart. Here’s How You Can Donate and Help Those Affected by Destructive Australian Wildfires.

TATE Animal Training Enterprises based in Sydney, specialises in detector dog services. Its team of pups has saved dozens of koalas. The four-year-old, Taylor has so far rescued eight koalas since September, 2019, reported ABC News. During windy days, Taylor searches for koala poop and help the rescue team locate the animal.

This rescue dog named Bear saved koalas and other injured animals from the fire in New South Wales. Bear’s owners abandoned him as he was highly energetic. But he finally found his calling as a koala detecting dog for the International Fund for Animal Welfare (IFAW).

Meet Patsy, Who Saved 900 Sheep From the Fires:

Patsy had a good night’s rest after another day out on the farm, and has woken up today to a social media avalanche!!! Her human family are blown away how far her story has spread.... anyway, Patsy and her human really appreciate all the support coming from all over the world 🙂 but unfortunately these fires aren’t over and won’t be for weeks. And the recovery from the fire damage will take months, years even 😢 we will keep posting updates on Patsy’s story as our little Upper Murray community moves into a new and uncertain future, but in the meantime, Patsy and her family would love you to donate to these bushfire recovery groups https://www.wildlifevictoria.org.au/?view=article&id=145:helping-wildlife-during-bushfires&catid=11:wildlife-information https://blazeaid.com.au/donations/how-donate/ https://www.redcross.org.au/campaigns/disaster-relief-and-recovery-donate #patsythecorryongwonderdog #workingdog #strongincorryong #australianbushfires

A post shared by Patsy The Wonderdog (@patsythecorryongwonderdog) on Jan 6, 2020 at 2:31pm PST

Patsy, the dog, had reportedly saved 900 sheep in the early hours of New Year’s Eve. Pasty, along with owner herded the sheep away from the approaching fires, secured them in a paddock and then went back to fight the flames as they neared closer.

This is how dogs are participating in rescuing animals from the Australian fires. Over 15 million acres have burned in Australia since the beginning of the fire season. The ongoing bushfire crisis has spread across six states and many months. However, latest update state that torrential downpours drenched much of bushfire-ravaged eastern Australia, provided much-needed relief to the firefighters battling a months-long crisis.

(The above story first appeared on LatestLY on Jan 17, 2020 08:00 PM IST. For more news and updates on politics, world, sports, entertainment and lifestyle, log on to our website latestly.com).