An adorable video of a Beluga whale playing fetch with a man on a boat has gone viral on social media platforms. The incident was recorded in Norwegian waters near the Arctic Pole. 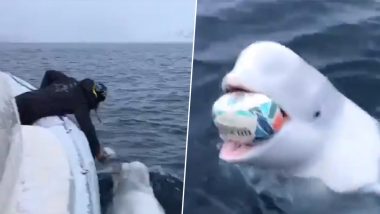 An adorable video of a Beluga whale playing fetch with a man on a boat has gone viral on social media platforms. The incident was recorded in Norwegian waters near the Arctic Pole. It shows the whale playing with the man like other domesticated pets do. As the video went viral, internet users said that it was a unique and incredible sight. It was shared on Twitter by a user, StanceGrounded, and has already been viewed over one million times. In the clip, the whale can be seen swimming to catch the ball and getting it back to the man. 'Biggest' White Shark Spotted in Hawaii: Divers Swim Together With the Great Predator, Watch Video and Pics.

Some social media users also asked if this was the same whale which was first sighed in May 2019 which was dubbed as 'Hvaldimir'. It was found with a camera harness marked 'St Petersburg' last year. It was extremely friendly and had caught the attention of Norwegian boats. The mammal looked extremely comfortable with human interaction. Hvaldimir had even returned a dropped cellphone from the ocean to fishermen. It even befriended a seagull and returned a fish that the bird dropped.

SA coaches getting hired all over the place. pic.twitter.com/Y6KP18DVFz

Meanwhile, some Twitter users commented that these sea creatures should be protected and to hence refrain from using plastic. A Twitter user wrote, "This man is playing fetch with a Beluga Whale. This is INCREDIBLE. We honestly don't deserve these Majestic Creatures. Protect them at all costs. PLEASE STOP USING PLASTIC." Isn't it amazing to see these sea creatures playing with humans? Do let us know your thoughts in the comments section below.

(The above story first appeared on LatestLY on Nov 08, 2019 04:35 PM IST. For more news and updates on politics, world, sports, entertainment and lifestyle, log on to our website latestly.com).