The online marketplace which is known for reselling used products or things that you no more need had an advertisement of an ex-boyfriend on sale! 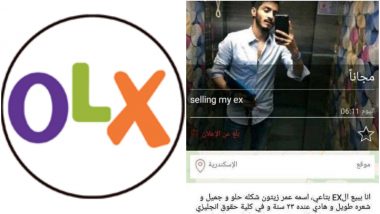 Dealing with a breakup is not easy. Each person has different ways of dealing with a relationship gone wrong. Some may be too quick to move on, others can take months or even years. While the healing process differs from person to person an Arab woman found something too unique to move on if, that qualifies under 'moving on.' An Alexandria-based woman had her ways of advertising her breakup with much humour and savagery! The woman put up her ex-boyfriend on sale on OLX! If that itself wasn't fun, she tagged him under the 'animal' category.

The online marketplace which is known for reselling used products or things that you no more need had an advertisement of an ex-boyfriend on sale! In the ad, she wrote, "I am selling my ex. His name is Omar Zeitoun. He is good-looking and calm, and he has long hair. He studies English law and drives a motorcycle." She also added that he is 'scratch-free.' To add to the joke, she also wrote that she is willing to accept whatever price she is offered. And about the category, she said, "I didn't find any section to present him in other than the animals section."

Now this entire joke doesn't stop here. The boyfriend Zeitoun actually had someone to pick him up! The ad is no more on OLX but Egyptian photographer Nour El-Din Fkronh posted a photo along with Zeitoun and captioned, "I bought the lad who was being sold by his girlfriend on OLX." The photographer's post has since then been going viral with people too laughing about the turn of events here.

Check out the advertisement and also the photographer who apparently bought the guy!

The ex-boyfriend Zeitoun later posted a video of himself riding a motorcycle and goofing around. In his caption, he wrote, "They say [I'm] for sale."

Both the posts are getting a lot of views, shares and comments, most of them only laughing with what just happened. Some people have tagged others and asked they should be sold too. And the curious ones want to know what happened between the couple that she had to 'sell him!' The entire incident seems quite funny from both the sides. While the girlfriend may have thought of it as a revenge, the guy is equally uncaring of what she did and joked about it. Well, one thing for sure, with the easy access of the internet anything is possible, even if it means advertising your ex for sale!

(The above story first appeared on LatestLY on Jul 26, 2018 11:45 PM IST. For more news and updates on politics, world, sports, entertainment and lifestyle, log on to our website latestly.com).