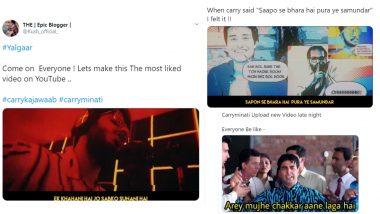 Indian YouTuber Ajey Nagar aka Carry Minati has dropped a new video titled, Yalgaar on his YouTube channel on late Friday night. The video has been highly anticipated among Carry Minati fans, especially after the release of its teaser in which the comedian promised to narrate his side of the story. Yes, the entire YouTube vs TikTok controversy that led to YouTube pulling down Carry Minati's "YOUTUBE VS TIK TOK: THE END" video over its harassment and cyberbullying policy. However, the Faridabad-based boy is back and this time with a rap video. It has led netizens to trend Carry Minati Yalgaar funny memes and hilarious jokes on the micro-blogging platform, Twitter. Yep, Twitterverse is buzzing with Carry Minati funny memes, and once again, it will make you ROFL!

Yalgaar is an Urdu word meaning 'assault or attack'. And that my dear friend is the title of Carry Minati's latest video. Do not worry, there is going to be no assault on your ears, or maybe just a tiny bit. The 20-something YouTuber is filled with rage and understandably as Google-owned video streaming platform removed his record-shattering video, "YOUTUBE VS TIK TOK: THE END" citing company policies and guidelines. It naturally left the young celebrity in his own right quite dejected. And now, Carry Minati has got into the Yalgaar mode, where he along with Wily Frenzy, a record producer/DJ, will make sure to teach their haters a good lesson. Amir Siddiqui, bachke rehna ab? At least, that's what Carry Minati fans are thinking of this video, which they are hailing as 'masterpiece'. Kunal Kamra Teaches CarryMinati Roasting Is Not About Cuss Words in His New Video but Ajey Nagar’s Angry Fans Troll Comedian With Funny Memes & Jokes!

If you ask us, rap is as ordinary as it could be. Carry Minati is accusing Amit Siddiqui, and this time indirectly by using TikTok star's silhouette by doing all wrongs and playing the victim card. Ironically, Carry Minati is doing just that in his new video. Nevertheless, this tu, tu, main, main can continue forever till we are getting our dose of funny memes and jokes. Checkout Carry Minati Yalgaar funny memes RN!

Come on Everyone ! Lets make this The most liked video on YouTube .. #carrykajawaab #carryminati pic.twitter.com/XzQb95sbsr

#Yalgaar is out. #carryminati #carrykajawaab

There is fun disclaimer posted below Carry Minati's Yalgaar video, which states: "Please don't go out of your way to or hate on anyone I talk about in my videos, this channel is to entertain people, and I usually focus on joking about what the people are doing not the individual themselves, please don't go spreading hate it's all for laughs." Okay, cool.

(The above story first appeared on LatestLY on Jun 05, 2020 11:56 PM IST. For more news and updates on politics, world, sports, entertainment and lifestyle, log on to our website latestly.com).