Chandramukhi Chautala Asking About 'Binod' in a Viral Video from F.I.R. Serial Is All of Us RN Whose Social Media Is Filled with Binod Funny Memes and Jokes! 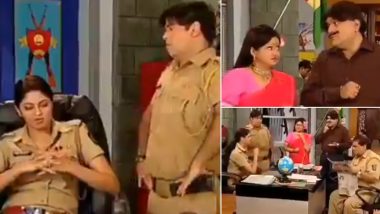 Have you checked the comments section on your social media posts lately? You'll surely find one that has the word "Binod". Why? You ask? Well, a video roasting stupid YouTube comments, has gone viral and one comment that YouTubers, Gautami and Abhyudaya -who go by the name ‘Slayy Point’- took a dig at was "Binod". Yes, a person who simply wrote his own name under the most irrelevant video. Abhyudaya talks about this type of comment that is so far away from relevance that it is insane.

But now a Chandramukhi Chautala video is going viral in connection with this "Binod" trend and it is even more hilarious. The video shows Chandramukhi Chautala asking about "Binod". "Ye Binod yaar, Binod, iska kaccha chitha nikalwao, zara chauki me bulao hum darshan karenge Binod ki", she says and TBH Chandramukhi Chautala in this video is all of us RN! Who is Binod? People cannot stop searching for on social media.   Binod Funny Memes and Jokes Are Trending on Social Media but Who Is Binod? Know About This Latest Viral Trend Over YouTube Comments.

People are finding this video extremely relatable. The video showing Chandramukhi Chautala willing to see Binod, who is said to be a "liftman" in the show is legit the most relatable thing! Ever since the viral "Binod" trend, many of us are left wondering who exactly this guy is! Kavita Kaushik who played the iconic Chandramukhi Chautala shared the video on her Twitter handle with a caption that read: "FIR was way ahead of its time wth is with Binod" and we couldn't agree more! Watch video:

FIR was way ahead of its time 😂 wth is with Binod pic.twitter.com/0Lw7esbwzQ

Watch Video of Slayy Point on Why Indian Comments Section is Garbage (BINOD):

#Binod funny memes and jokes are going viral and recently even PayTM changed its name to Binod. Funniest memes and jokes on Binod have taken over social media and people don't seem to be over it anytime soon. Well, we won't deny that a population want this whole 'Vinod' to end but for real, it is actually becoming fun every day!

(The above story first appeared on LatestLY on Aug 09, 2020 07:55 PM IST. For more news and updates on politics, world, sports, entertainment and lifestyle, log on to our website latestly.com).