The concert was a tribute to her mother who was also her best friend said Evelina. 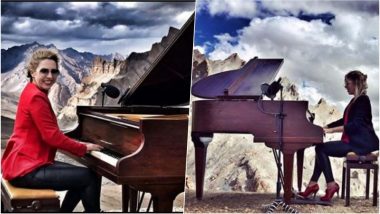 A London-based musician sets a world record for the highest ever classical concert as she performs a 90-minute performance in the Himalayas, India. Evelina De Lain took her grand piano 5000m up a Himalayan mountain pass to set the world record. The 41-year-old performed Chopin’s Nocturnes No. 2 in E flat major and No. 20 in C sharp minor during her entire performance in India. In her other biggest achievements, she has also performed in front of the likes of Prince Charles, Michael Jackson and Tony Bennett, as reported by Metro.co.uk. Gujarat Real-Life Rapunzel Nilanshi Sets Guinness World Record for Longest Hair on Teenager Category (Watch Video).

Talking about her experience of playing music in the cold weather, Evelina said the hardest bit was the wind, not the cold, which felt like it was penetrating her bones while she pressed each key. The pianist was joined by a team who helped to drive and carry the Challen piano to the Singela Pass in the Himalayas, India. ‘Concert in the Clouds’ was to raise money for the Cystic Fibrosis Trust and the piano was donated to the local school. Piano Event in China Creates New Guinness World Record.

Finally, I can share this with you!  On September 7th I have successfully performed a concert at 5000m high altitude, from what I know it was the highest performance on a grand piano in the world. (Guinness Book of records request pending). Last month, I and a team of adventurers embarked on the biggest climb in our lives transporting a grand piano to Shingo La Pass in the Zanskar in India, Himilayas. Under a crazy weather of hail, sudden sunshine and extreme wind, I have performed compositions from my album ‘Soul Journey’ as well as a few of my favorite Chopin pieces. Despite the extremely difficult breathing and weather conditions I managed to perform non-stop for one and half hours until my hands and feet completely gave up, especially my right hand and the right foot as I couldn’t find my one of my socks, LOL. I dedicated this concert in the clouds to my mum, my teacher, my producer, my best critic - Valentina Pronskaya, who I tragically lost last year. “From age 5, my mum was my music teacher and mentor. She passed away 3 weeks before her 70th Birthday from sudden heart failure. The shock made me numb with grief for a long time. It broke my heart that instead of being back in my hometown celebrating her big birthday I was attending her funeral. It taught me to never take life for granted and to aspire for new challenges - of which this concert has been the biggest so far”. This project was organized by a truly inspirational spirit - Desmond Gentle of “Camden Piano Rescue” and supported by Baird’s bank.  We were also raising money for Cystic Fibrosis trust where £7500 has been raised to date and the piano has been donated to the local college in Leh, Ladakh. It has been a whirlwind adventure and you will see more pictures and the documentary soon - all the music videos and “behind the scenes” are being edited.  Thank you to my bestie Dmitry Jemelins for photography and videography All the pictures from these few posts are screenshots of the videos. I’m presenting this event at my piano salon this Saturday 13th of October with quite a few surprises planned for those in attendance: #pianist #record #worldrecord #himalayas #india #trip #journey #mountains #mou

She also played compositions from her solo album ‘Soul Journey’. She said, “I would never in a million years ever think I’d play classical piano again let alone play the highest classical concert. It was one of the hardest things I’ve ever done but I’m not one to shy away from a challenge, and it was such an honour to be asked to play my music in the clouds.”

After Evelina’s mother passed away in 2017, she bought a piano from trip organiser Desmond Gentle, who owned a shop for refurbished pianos, Camden Piano Rescue. As reported in Metro, Evelina said, “I wanted a piano chair but then saw this beautiful grand piano. It was beige and quite unusual, so I started to play, and Desmond fell in love with my style. I knew that something like this would get me out of my grief, give me something to focus on.”

Desmond was also the one who convinced Evelina to give the record-breaking performance. Evelina said that Desmond had warned her about the difficulties because of the altitude. She said, “I definitely had to pool my resources to keep going. Desmond had warned me I may not last long with the altitude. At the time the altitude wasn’t bothering me much but the next day I fainted in the airport.” The concert was a tribute to her mother who was also her best friend said Evelina. She is originally from Ukraine and was taught how to play by her mother.

(The above story first appeared on LatestLY on Jan 07, 2019 12:24 PM IST. For more news and updates on politics, world, sports, entertainment and lifestyle, log on to our website latestly.com).