Nilanshi was six-year-old when she had an awful haircut. 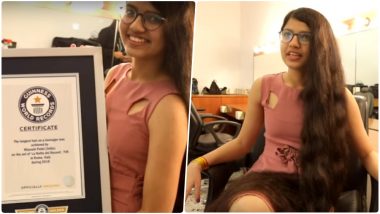 We all have had our share of bad haircut days. But that does not really stop us from visiting the salon and trying different looks. It did not go similar to this teenage girl from Gujarat. ‘Love’ is an understatement when it comes to how precious her locks are for her. Ten years ago, Nilanshi Patel had a bad haircut, and ever since then, she decided not to cut her hair again. Now that hair has grown to the length of 5 feet and 7 inches thick, shine and long. Dubbed as real-life ‘Rapunzel’, this Modasa town girl is winning hearts and at recent achieved the Guinness World Record for being the teenager with the longest hair across the world. Five-Year-Old Mia Aflalo’s Beautiful Hair Makes Her an Instagram Star and Lands Her a Place in British Vogue!

Nilanshi was six-year-old when she had an awful haircut. She is 16-year-old now, and the decision of not visiting the salon has earned her global attention. Her achievement would be a part of the 2019 edition of the Guinness World Record book. In an official video, Nilanshi revealed how her mother helps her in maintaining her long hair. Every time she washed her hair, it takes half an hour to dry and an hour to comb it and get it in order. 6 Reasons Why You've Been Facing Excessive Hair Fall.

The 16-year-old said that her long hair has never got in the way of any of her day to day activities. “I consider the locks as my lucky charm,” says the young record holder. Before Nilanshi, the record was held by Abril Lorenzatti from Argentina with 152.5 cm long hair. Meanwhile, the record for the longest hair on a woman’s head is owned by China’s Xie Qiuping whose hair is about 18 ft 5.54 long.

(The above story first appeared on LatestLY on Dec 26, 2018 05:18 PM IST. For more news and updates on politics, world, sports, entertainment and lifestyle, log on to our website latestly.com).