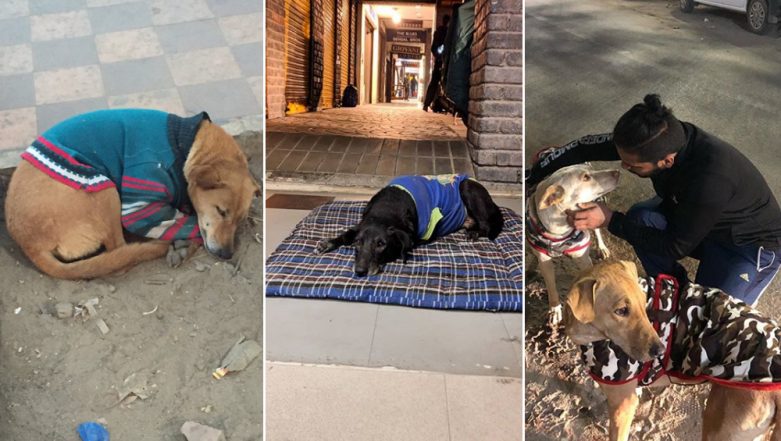 The winter wave has hit the Northern parts of the country and how. As the mountainous areas lie capped in snow, the Northern states are also shivering. The capital city Delhi is also experiencing colder temperatures day by day and some people in the city are ensuring that along with keeping themselves warm, they also look after the strays. In a lovely display of humanity towards the strays, several organisations have been dressing the street dogs in sweaters to keep them warm in winters. Few pictures of dogs wearing the sweaters have also been posted on social media. Bus Driver in Chile Allowed a Stray Dog to Ride in Bus Because it Was Cold, Watch Heart-warming Video!

Animal lovers and pet owners unite every year to gather sweaters for the street dogs. Fundraisers are also held year after year to gather enough money to provide the strays with good quality sweaters. NGO drives are held to urge people to contribute and also make sweaters and jackets for dogs. Wollen blankets, carpets, smaller jackets can also be donated which can be used as is or modified for the street dogs. While pets are cared well for by the owners, the street dogs usually have to find warmer corners and still shiver in the cold. Donkeys Wearing Fashionable Pants Are a New Trend? Watch Pics!

This One's got a Bed of its Own

Sure a pretty sight

Some Old Pictures of Strays Wearing Sweaters in Delhi

Someone put a sweater on this homeless dog in New Delhi :') pic.twitter.com/4fD2MkH6GQ

Noticed a lot of the stray dogs like this one in Delhi were wearing sweaters, saw one wearing a shawl #India pic.twitter.com/PtjRUR5G

The tradition has been carried on since years and it is really a cute sight to see people of Delhi doing it year after year without fail. To all the lovely people of Delhi, 'Dog Bless You!'