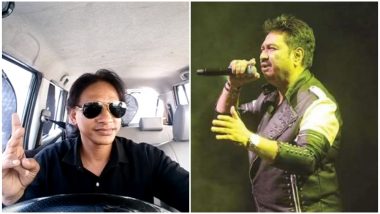 Over the past few years, we have met so many talented artists, whom we might not have come across if it was not for the world's obsession with the internet. A few days back, Ranu Mondal, from singing at a railway station platform in Kolkata, rose to the occasion to land a song deal with Himesh Reshammiya. Now, the internet cannot stop talking about Vinod Sharma, an Uber driver from Lucknow, who sings in his saccharine-sweet voice for the riders. A video of the cab driver crooning Nazar Ke Saamne from Aasqhiqui has gone viral. It seems that success might come knocking on his door, as well, soon enough, looking at his growing popularity. We got in touch with the talented singer for a tidbit. His humility deserves brownie points. He talked to us about his dreams and aspirations, here are some excerpts. Lucknow's Uber Driver, Vinod, Beautifully Sings 'Nazar ke Saamne' Song from Aashiqui, Will He Be the Next Ranu Mondal?

Vinod credits his current success to God and the blessings of his elders. "I have been singing since I was 3 or 4 years old. When this habit became an addiction, I didn't even come to know. In 2007, I auditioned for a radio show, and, thanks to my luck, I got selected. My financial status was not good so I could not learn classical music," Vinod said.

Vinod's family and neighbours were not a big fan of his passion for singing initially. He used to hide and practise singing when he was a kid. Now, he is married with two kids, but says that the passion for singing has kept him intoxicated. "Now, I even drive a Uber. Sometimes, I drive less and sing more. If I had a private job, I'd have felt suffocated," he said. Uber Driver Menzi Mngoma Becomes Opera Sensation in South Africa After His Video Goes Viral, to Record a Single Soon!

Vinod started his YouTube channel very recently. He makes sure to ask his passengers to subscribe to his channel. "I meet 10-12 people daily. I drop them and request them to listen to my song," he said.

Vinod has romanced reality shows as well. He has auditioned for Indian Idol and Sa Re Ga Ma Pa. "It is about luck. Being selected or not is upon God's will, also. But I gave it my best. Whenever I didn't get selected, I tried harder again. So, that I can tell myself and my kids, that I gave it my all to the auditions."

He has big plans and working towards those plans. "Now, I am saving up money. I want to launch my personal music album that would include my personal compositions," he revealed. "I started driving Uber myself in July. Just recently I became debt-free after paying off the loans."

"I am just waiting to collect Rs 20 thousand. I don't want money from anyone, just blessings," he said, adding that he has immense patience in his heart, and will wait for his day to come. Vinod said that to meet his goals he even drives the cab around for 24 hours straight, if it requires. "I start my day at 8 AM and come back the next day at 10 AM."

"I am a die-hard fan of Kumar Sanu. I have written a song. I wish he sings my personal composition once," Vinod signed off. We hope, we get to interview Vinod once again. This time after he has become a professional singer and has realised his dream of publishing his album.

(The above story first appeared on LatestLY on Sep 16, 2019 04:56 PM IST. For more news and updates on politics, world, sports, entertainment and lifestyle, log on to our website latestly.com).