Fact Check: Katrina Kaif's Images From Old Ad With Amitabh Bachchan are Going Viral as Pictures From Her Mehendi Ceremony

Amidst VicKat's pre-wedding festivities, Katrina Kaif's pictures in a pastel green Kanjivaram saree with mehendi on her hands are going viral on social media. Here's the truth behind the clicks. 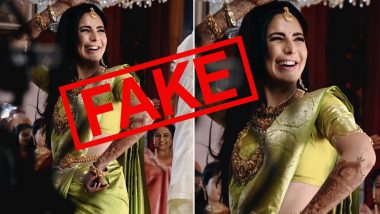 Vicky Kaushal and Katrina Kaif's destination wedding in Rajasthan happens to be one of the hot topics of discussion on the internet right now Reportedly, on December 7, the couple had their sangeet ceremony and today (December 8) marks their mehendi occasion. Until now, not even a single picture from the pre-wedding festivities has been leaked online. However, a fan page of Katrina shared a few pictures on Twitter claiming that it's from the actress' mehendi ceremony. And in no time, the clicks went viral all over the web. Katrina Kaif and Vicky Kaushal’s Wedding Telecast Rights Sold to Amazon Prime for Rs 80 Crore – Reports.

The fan page has captioned the images as," she’s literally enjoying and being so happy and glowy on her special day."In the photos, we see Katrina dancing her heart out in a green kanjeevaram saree. The glow on the actress' face is immense as we also spot mehendi on her hands. But, there is more to the tale than what meets the eye. Katrina Kaif-Vicky Kaushal Wedding: Wikipedia Reverses Spouse Section After The Couple Was Shown Married to Each Other On Their Individual Pages.

Check Out The Pics:

Our curious mind made us do a little bit of research online. And we at LatestLY went to the crux of the pictures and found out the authenticity of them which happens to be quite opposite to what has been claimed.

While the pictures shared by the fan page of Katrina Kaif are not morphed and real. However, the reality is that it's not from VicKat's mehendi ceremony but from an old advertisement, that featured Amitabh Bachchan with Katrina. In the jewellery advertorial, Kaif was seen in different bridal avatars.

Well, this is not the first time we have seen something like this happen. Many times, fans, celebs in excitement share something that's viral, without checking its authenticity.  In a nutshell, the pics are not from Katrina-Vicky's mehendi. Roger that.

(The above story first appeared on LatestLY on Dec 08, 2021 08:30 PM IST. For more news and updates on politics, world, sports, entertainment and lifestyle, log on to our website latestly.com).