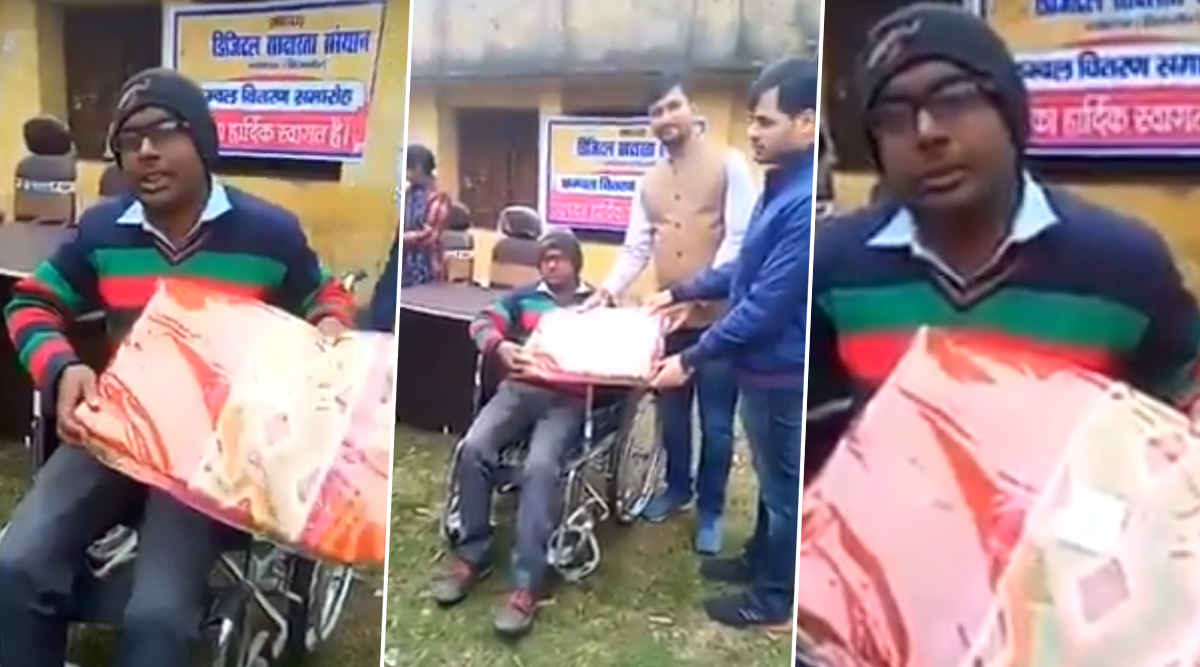 New Delhi, February 1: With the Delhi assembly elections 2020 hardly a week away, the social media is rife with videos that are claimed to be associated with one party or the other. A similar video doing rounds on Twitter and Facebook claims that the Aam Aadmi Party distributed 'magic blankets' to specially-abled or divyang following which the speacially-abled started to walk. However, the truth behind the video is not what is claimed on social media. Coronavirus Scare in India: 'Emergency Notification' on Deadly Virus Goes Viral on WhatsApp; It is Fake, Clarifies Government.

“The moment this divyang (differently abled) got the blanket, he started walking,” claims the videos. It also shows a man on a wheelchair, who identifies himself as Ramesh Singh. In the video, he thanks a person named Ravi for giving him the blanket. After his testimony, he walks back to his wheelchair. Tarek Fatah's 'Brain Fade' Moment? Asks Twitter If Dance Video of Burqa-Clad Women is From Shaheen Bagh; Fact-Check Shows He Himself Shared The Clip 3 Years Ago.

See the 'Magic Blanket' Video in the Tweet Below

AAP propaganda video. Blankets being distributed to disabled persons. It looks like the director forgot to say “cut” and the person starts walking away. Magic blanket indeed. pic.twitter.com/VDiWBJUjep

Distribution of blankets to disabled persons in Delhi stated to be by AAP. The disabled person walks away with the blanket afterwards. See the fun pic.twitter.com/HbU08umrEn

However, Digital news portal Quint reported that the video is not from Delhi but Bijnor’s Seohara area in Uttar Pradesh and a video clip is of a local news channel Abhi Tak. The video was uploaded by Digital Saksharta Sansthan on their Twitter account.

The video has absolutely nothing to do with the Aam Aadmi Party (AAP). The blankets were distributed by the Digital Saksharta Sansthan in a distribution ceremony. The reason Ramesh, the specially-abled seen in the video could walk, is because he has 40 percent disability, said the report. Therefore, the claim that AAP distributed blankets which resulted in the specially-abled man walking is absolutely false and misleading.

The claim is absolutely false and the blankets were not distributed by the Aam Aadmi Party (AAP).