The latest fake news believed to be true is a story that was reported on a site called 'The Fauxy' that writes fictitious content. A fake article written simply for fun is being widely shared on the internet claiming it to be true. 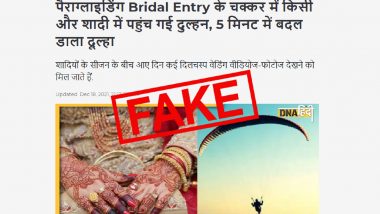 No matter how cliche it sounds but the wedding is probably the biggest day of a person’s life, and people are leaving no stones unturned to make their weddings memorable. People are now hiring wedding planners to plan their weddings, and wedding planners are coming up with the most innovative ideas from the elaborated setup, grand functions, and the most-awaited, spectacular entries of the bride and groom. We see the viral videos of such mesmerizing weddings every now and then on the internet.

However, there is a fake article about a 'paragliding bride' that is getting widely shared on social media platforms. The fake news believed to be true is a story that was reported on a site called 'TheFauxy'. TheFauxy calls themselves 'India's Finest, Fastest & Fictitious News Source', but their stories are being shared by people believing it to be true news. The headline of the story reads, "Bride Marries Different Groom As She Landed In Different Venue During Her Paragliding Entry."  Fact Check: Viral Video Showing Crash of IAF Mi-17 V5 Helicopter Carrying CDS Gen Bipin Rawat Is Fake; Know Truth Here.

According to the story, a bride’s grand paragliding wedding entry went wrong and she landed in another wedding venue where she ended up marrying a different groom. Reportedly, bride and groom were set to marry, and to make their wedding more exciting, they also made a hashtag for their wedding, #DeepShit. The theme of the wedding was a Miner and an Angel, where the bride was supposed to land on stage dressed as a beautiful angel whereas the groom would be dressed as a miner working in a mine. The set was designed as a mine. The bride even took paragliding lessons. Fun fact, the fake story claimed that the bride gave up her interior designing course to pursue paragliding full time.

However, when the bride jumped from the plane, the atmosphere was windy, fortunately, she landed safely on the ground. Unfortunately, she landed at the wrong wedding venue. Where she, after deep contemplation, decided to marry a different groom. The groom had no idea that this is not the bride he was set to marry. On the other hand, at the right venue, police charged everyone thinking it was an agitation by the miner's union. 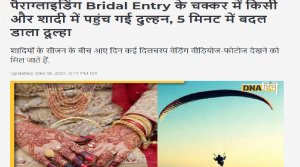 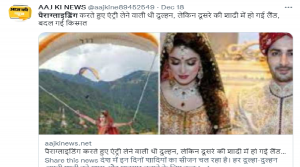 Since the story was first reported, netizens are sharing the news on social media platforms. Even some news websites such as DNA Hindi and Asianet News Hindi fell for the article on a satire website and ran this as actual news without checking. The story, while amusing, is fake. a simple glance at the website will make it clear to anyone that it is a site that writes fictitious content especially pertaining to trending topics across the countries.

News shared by TheFauxy, a site that calls itself \'India\'s Finest, Fastest & Fictitious News Source\' states that a bride married a different groom as she landed in a different venue during her paragliding entry.

The story is fake. The site writes fictitious stories and has nothing to do with reality.

(The above story first appeared on LatestLY on Dec 19, 2021 03:55 PM IST. For more news and updates on politics, world, sports, entertainment and lifestyle, log on to our website latestly.com).