An old video of Syrian Mi Helicopter is being widely shared with a false claim that the it was of the crash of IAF's Mi-17 V5 helicopter carrying CDS General Bipin Rawat. 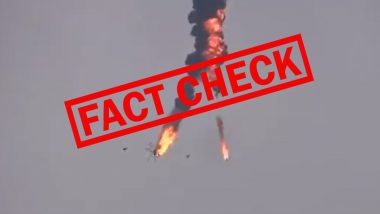 Mumbai, December 8: An Indian Air Force (IAF) helicopter, Mi-17 V5, crashed near Coonoor in Tamil Nadu’s Nilgiris district. Chief of Defence Staff (CDS) General Bipin Rawat, his wife and 11 others died in the crash. The incident took place at the Nanjappanchathiram area between Sulur and Coimbatore amid the heavy mist. After the incident, a video of an MI helicopter crashing mid-air is going viral on social media with the claim that it was the same Mi-17V5 chopper that crashed earlier on Wednesday. PM Narendra Modi Mourns CDS General Bipin Rawat’s Death, Says ‘India Will Never Forget His Exceptional Service’.

The video is being shared with a false claim. The helicopter in the video was not MI-17 V5 that crashed in Tamil Nadu on December 8. It was a Syrian Mi17 that was shot down in 2020. The helicopter was shot down over Al-Nayrab, Idlib. The incident took place in February 2020. CDS General Bipin Rawat Dies in IAF Helicopter Crash in Tamil Nadu, Wife Madhulika Rawat Among 12 Others Dead in The Crash.

The video was first shared by a Twitter user, “Babak Taghvaee - The Crisis Watch”. The Twitter user claimed that the helicopter was shot down by the Turkish Forces. The tweet read, “An hour ago, this Mi-17 utility helicopter of #Syria Arab Air Force was shot-down over Al-Nayrab, #Idlib. #AlQaeda affiliated & #Turkish backed militias are trying to take responsibility, but it is certainly known that #Turkey targeted this helicopter.”

An hour ago, this Mi-17 utility helicopter of #Syria Arab Air Force was shot-down over Al-Nayrab, #Idlib. #AlQaeda affiliated & #Turkish backed militias are trying to take responsibility, but it is certainly known that #Turkey targeted this helicopter. pic.twitter.com/ZRzx9ShrlV

Earlier In the day, General Rawat and 12 others, including his wife, were killed in the military chopper crash. Thirteen personnel out of 14 onboard the helicopter died in the crash. Group Captain Varun Singh was critically injured in the crash. The chopper took off from the Sulur Airbase and was proceeding to Wellington when it crashed.

LatestLY advises its readers not to share any news or post without verifying it from official sources.

Video is going viral on social media with a claim that it was of the crash of Mi-17 V5 helicopter carrying CDS General Bipin Rawat.

(The above story first appeared on LatestLY on Dec 08, 2021 08:14 PM IST. For more news and updates on politics, world, sports, entertainment and lifestyle, log on to our website latestly.com).