A massive fire broke, out in Beirut's port on Thursday, just a month after a massive blast erupted at the same site. The Lebanese army on Thursday said that the blaze erupted at a warehouse that stored oils and tyres in the port's Duty-Free area. Residents have been to clear the port for their safety. 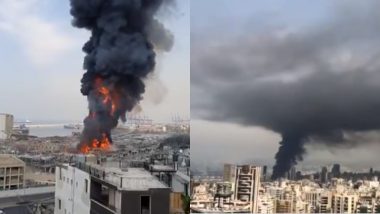 A massive fire broke, out in Beirut's port on Thursday, just a month after a massive blast erupted at the same site. The Lebanese army on Thursday said that the blaze erupted at a warehouse that stored oils and tyres in the port's Duty-Free area. Residents who were still reeling out of the shock that killed 200 people a month ago, have been asked to clear the port for their safety and let firefighters perform their job without any obstacles. Workers are trying to remove the debris from last month's explosion. Pictures and videos of the fire billowing have gone viral on social media platforms. Massive Fire at Beirut Port, Month After Area Was Hit By Explosions; Watch Horrifying Video.

Meanwhile, helicopters are also aiding the operations trying to extinguish the fire. Residents of Beirut also shared clips on the fire on social media expressing how the same incident has once again repeated inciting fear in the minds of people. This time the presence of explosive material in the area cannot be ruled out.

Raging fire in Beirut’s port right now, causing a wave panic across Beirut one month after the #BeirutBlast ravaged the city. #lebanon pic.twitter.com/5xDs7XBk8i

Lebanese Army helicopter heading to port of #Beirut to put out a fire that erupted in an oil and tires storage as the army said.#Lebanon pic.twitter.com/qaHXPGHMPR

And this again shows how huge the blaze is - taken by @timourazhari driving down the main road in front of the port #beirut pic.twitter.com/cMZeOdzcaE

Fire in the port again in #Beirut. This is from my car. Its confirmed that a warehouse containing oil and tires is burning. pic.twitter.com/Xdy970lVmB

That Looks So Scary:

The sky has turned black again in Beirut. pic.twitter.com/8Z8OSVu4QD

Last month's explosion cost dearly to the people of Lebanon as people lost their dear ones in the attack. Ten firefighters were also killed while trying o extinguish the fire caused by the explosion. It also affected their connection with the outside world and the city was only crippling back to normalcy when the next fire happened. on August 4, nearly 3,000 tons of ammonium burnt in the capital city leaving more than 300,000 people displaced. Following the blast last month, there were calls for President Michel Aoun to resign. Even before the previous blast, Lebanon's economy has been struggling.

(The above story first appeared on LatestLY on Sep 10, 2020 06:49 PM IST. For more news and updates on politics, world, sports, entertainment and lifestyle, log on to our website latestly.com).