#FormalFridays: People in Australia Work From Home Nicely Dressed Up on Every Friday During Quarantine (See Pictures) 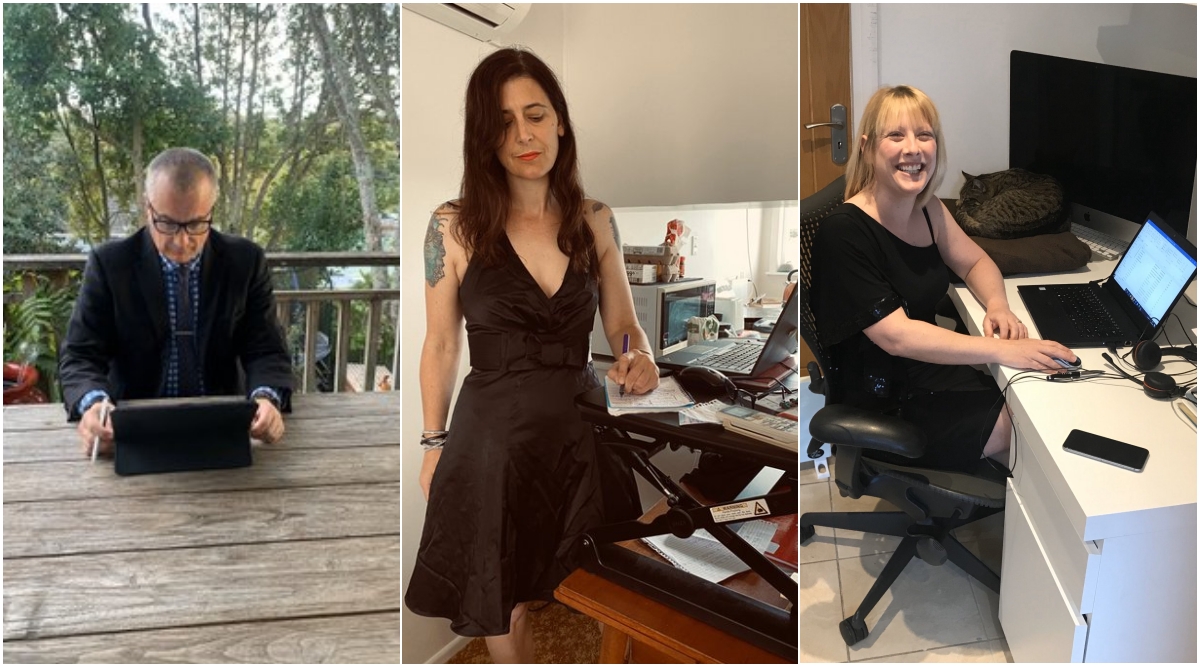 If you have been working in a corporate setup then you know how Fridays are lighter days, with the weekend starting right after you end work. In many offices, Fridays are the day when employees ditch the formals and dress up casually to work. But as Coronavirus lockdown in several nations has forced people to work from home, every day is like sitting in pyjamas. And while that is comfortable, people are ditching the casuals to dress up in formals on every Friday in quarantine. A fun trend called #FormalFridays has been started online which has people posting their pictures, all suited and formally dressed as they log in to work from home. Popular celebrities are also being a part of this trend, which first started in Australia. Work From Home Struggles: From Battling Unemployment Rumours to Severe Back Pain, 7 Things People With WFH Can Totally Relate to.

As a lot of people from around the world are currently stuck up within their homes, they can feel something amiss even if they are working. American talk show host Jimmy Kimmel and TV personality Hilary Barry both put up their pictures all formally dressed up and shared it with the hashtag #FormalFridays. Soon more netizens joined along and are liking to dress up and work at their desks. Followed from the last two weeks, it has now emerged into a fun work from home trend. On this Friday, we share you some pics of people all dressed up and ready to work. The trend picked up in New Zealand after TV personality Hillary Barry posted her pictures working in a ball gown. Many women took inspiration and started dressing up. Working from Home during COVID-19 Pandemic? These Stretches Will Help Ease Elbow Pain from Too Much Typing.

Couldn’t zip it up but so committed to the cause I wore it anyway. 1987 school ball dress for the #bubbleball #formalfriday pic.twitter.com/hNR4sWuGTb

Check Pics of People Dressed up for #FormalFridays:

Reporting in a Ball Gown

Am I doing it right?! Birthday in a ball gown working single mama reporting for #formalfriday pic.twitter.com/Cy5d0ZVQ6u

Kids Find it Funny But Nevermind

Not quite formal, but smart & professional for #formalfriday.

My kids think it's hilarious that I get dressed to work from home... pic.twitter.com/CHJnIMSjbK

Not only did I break out the new suit for #formalfriday, I even gave the head a fresh shave & trimmed the beard pic.twitter.com/hwGa38p3dm

#formalfriday going well so far. No one suspected a thing until the jets came on pic.twitter.com/jAFaTQ8Nrm

All Dressed For Office

It is nice to see people all dressed up for work, even if it means, sitting at home. While Fridays were otherwise meant to be for casuals, the trend of formals is catching up. Well, as long as, it is getting people excited for working and spreading positivity, all for it.