Nirmala Sitharaman began her speech by recognizing landslide victory in Lok Sabha Elections, saying that it is reflective of a ‘new India’. FM said that India will be $3 trillion economy by the end of this year and will achieve the target of $5 trillion economies in the next five years. However, that was not the common man's expectation. 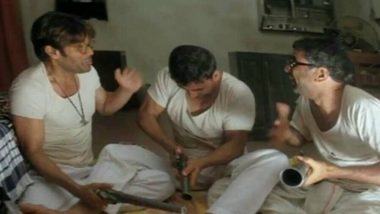 Nirmala Sitharaman on Friday, July 5, presented her maiden Union Budget in the parliament. Sitharaman, who is the second finance minister after Indira Gandhi, noted the role of the private sector in the growth story of India and termed them as job creators as well as wealth creators. Barely a few minutes into the speech, Twitter started exploding with memes and jokes. In the first budget of Prime Minister Narendra Modi's second government, there is no tax cut for the middle class.

FM began her speech by recognizing landslide victory in 2019 Lok Sabha Elections, saying that it is a reflective of a ‘new India’. Sitharaman said that India will be $3 trillion economy by the end of this year and will achieve the target of $5 trillion economies in the next five years. However, that was not the common man's expectation. The lack of tax relief pushed the middle class to Twitter and post memes to express their disappointment. Union Budget 2019 Political Reactions.

Definitely budget 2019 is healthy for infrastructure as well as business too. it's good for farmers, women too but clearly showing, government fully ignored middle class in it. So can we called this budget "infrastructural and business budget19"#Budget2019 #BudgetForNewIndia

Middle class : Modiji where is my tax relief in #Budget2019

2. Then Middle Class after FM Speech.

Middle class calculating the tax benefits they are going to get in the budget #Budget2019 #BudgetForNewIndia #NirmalaSitharaman pic.twitter.com/SPrZJmMYQX

#Budget2019#Once Again Middle Class Man get Nothing From Budget.. pic.twitter.com/Ddgss07akR

Expectations of Middle Class from starting to end of #Budget2019 pic.twitter.com/Si1ud3MYm8

"I’m a simple man; I see things getting more costlier. Where are the promises made to middle class? 5 trillion economy ain’t syncing well. Where’s the relief? ☹️ India deserves a distinguished economist; merely appointing a woman won’t do any good for economy," said a Twitterati.

"There Used to Be a Time When Every #budget the Tax Slabs Would Be Rejigged and Minimum Taxable Income Increased Thus Providing Relief to the Salaried Middle Class. That Hasn’t Happened for 5 Years Now, "said Kamal Joshi, a twitterati reacting to Union Budget.

Meanwhile, hope you all had a great budget. If not, these memes and jokes would have made you smile!

(The above story first appeared on LatestLY on Jul 05, 2019 05:54 PM IST. For more news and updates on politics, world, sports, entertainment and lifestyle, log on to our website latestly.com).