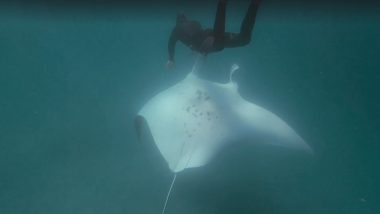 A group of divers have captured heartbreaking underwater footage of a giant manta ray begging them to help her out. A giant three-metre-long fish had fish hooks under its eye, and on spotting divers, it went one of them begging for help. Video footage of the incident from Ningaloo Reef off Western Australia was released by a British marine biologist and it is indeed going viral. The manta ray swam to snorkelling guide Jake Wilton and tried to show him the fish hooks under its eye. The fish came up again and again to him. Jake Wilton helped her out after it stayed calm. In the viral video, he described the entire incident. Killer Whale Imitates Human Speech in France Aquarium! Watch Video.

Monty Halls was among a group of freedivers exploring Ningaloo Reef with Ningaloo Marine Interactions. Jake Wilton, who help the sea creature called it "one of the best things I’ve ever seen underwater." The manta ray is seen heading to Wilton, again and again, to show the fish hooks under its eyes. Wilton too helped to remove them off gently. Wilton told The Independent, "She got closer and closer and then started unfurling to present the eye to me. I knew we had to get the hooks out or she would have been in big trouble. I went for a few dives down to see how she’d react to me being close to her." Dead Humpback Whale Found in Amazon Jungle! Scientists Are Figuring How it Got There.

The locals are calling this particular manta ray Freckles. This encounter is indeed rare behaviour of this sea creature. David Boyle, a lecturer of marine biology mentioned that it is not uncommon of mammals to interact with divers in times of distress. But it is still novel to see this in time of distress. Manta rays are not as harmful to humans because they do not have a spike like the stingrays. Experts also believed that had the hooks not been removed, she could have got an infection resulting in blindness. Well, it is indeed heartwarming how the diver has helped save a life of the sea creature.

(The above story first appeared on LatestLY on Jul 12, 2019 10:38 AM IST. For more news and updates on politics, world, sports, entertainment and lifestyle, log on to our website latestly.com).