Harvard Business Review Faces Backlash for 'Ideal Worker or Perfect Mom?' After Their Tweet ‘You Can’t Be Both. Stop Trying.’ Goes Viral 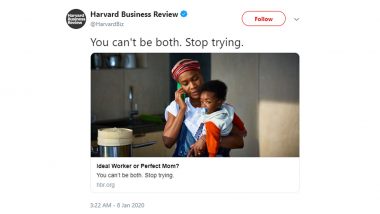 Harvard Business Review is facing immense criticism on Twitter as it is being accused of having made an "offensive" statement in a tweet shared by their handle @HarvardBiz that said, "You can't be both. Stop trying.", in the caption. Not just the caption but also the article, Ideal Worker or Perfect Mom? written by Alison Beard. The accusations made by netizens consider the caption and the story demeaning to women and to be implying that "women have to choose between work or motherhood—or that they can't excel at both". While the premise in which the tweet is said to have been made in a different way than what it is being understood by Twitter, the backlash doesn't seem to stop.

Harvard Business Review even posted an update tweet on how the context of the caption is being misunderstood, but looks like people cannot stop finding it offensive. The tweet contains the link of an article is titled "Ideal Worker or Perfect Mom?". The opinion article consists takes at new book releases like Anne-Marie Slaughter’s Unfinished Business and Sheryl Sandberg’s Lean In. However, the caption that read: "You can't be both. Stop trying.", may have given an impression that the author is trying to say that a woman cannot do both the things. Take a look at the tweet:

You can't be both. Stop trying. https://t.co/Cb5HQQPLFM

Harvard Business Review posted an update after the backlash that read: "We appreciate the feedback. The tweet was meant to refer to the impossibility of meeting society's high standards for both mothers and workers, a theme of the article. It was not meant to imply that women have to choose between work or motherhood—or that they can't excel at both."

Take a Look At The Reactions:

Would you have written that about men? Shocking coming from Harvard @WeTheWomenAsia @HarvardBiz https://t.co/GCTdSJR7VO

Another Angle To The Controversy

And! How do you publish an article with admittedly limited (I.e. lacking credible) research in the first place? And! Did the photo editor read the article? Over 150 years ago, Sojouner Truth asked “Ain’t I A Woman?” We are asking now.

I honestly thought this was a troll post. I'm shocked that any business would post such a sexist article.

I read it with the same hope and didn't find it to be much better than the headline. I get the impression that it was written by a woman struggling with feeling overwhelmed and guilty, as so many working parents do, and it wasn't a healthy place to write from. The last line: pic.twitter.com/JeL3OXIukS

The tweet has been receiving consistent backlash and is being criticised for the caption of the tweet and the headline of the article. Some people who read the story also said that they didn't find it any different from what the headline implies.

(The above story first appeared on LatestLY on Jan 10, 2020 02:27 PM IST. For more news and updates on politics, world, sports, entertainment and lifestyle, log on to our website latestly.com).