Akshay Kumar made it official that the popular Hera Pheri franchise is moving forward without him. FYI, Akki has been replaced by Kartik Aaryan in the threequel. Here, check out memes on this major news from Bollywood. 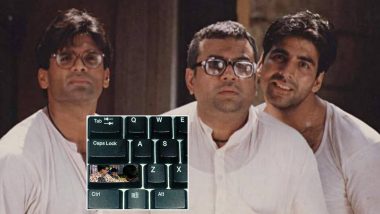 On November 12, Akshay Kumar at an HT event, confirmed that he has backed out of Hera Pheri 3. Citing 'creative differences' as the reason for his exit, Akki added that he was not happy with 'script' and 'screenplay' of the film. With this, it was official that Kartik Aaryan is indeed playing one of the leads in the hit comedy franchise Hera Pheri. However, a section of fans online were disappointed with Khiladi Kumar's goodbye from the project and so churned funny memes and jokes on Twitter. Hera Pheri 3: Akshay Kumar Confirms Backing Out of the Film Due to Creative Differences, Says 'Was Not Satisfied With the Script'.

Netizens who wanted Akshay Kumar, Paresh Rawal and Suniel Shetty to reunite for the third part of Hera Pheri were all sad. Right from mocking Kartik Aayan for replacing Akshay to sharing hilarious memes and photos from the iconic film, Twitterati poured their heart out over the news. Here, check out some fun memes and jokes on Hera Pheri 3 below. Akshay Kumar Confirms His Exit from Hera Pheri 3, Apologises to Fans (View Tweet).

'Someone Else As Raju'

Cant imagine our life without this memes..then how we are going to see someone else as Raju OG!! Memelord #HeraPheri3#HeraPheri

NO AKSHAY NO HERA PHERI3 pic.twitter.com/nsVOzAr4wz

We Just Can't Imagine #HeraPheri3 Without Our Raju Aka Akshay Kumar 🐐

This Is Reaction Of Every Hera Pheri Fan Right Now 🥲

'No Akshay No Hera Pheri 3'

Can't imagine anyone replacing Akshay Kumar as raju. He literally made the Raju character iconic.

Everyone's feelings are attached to the Character of film #HeraPheri .

So, after seeing the above memes, which side are you on? Are you team Akshay or team Kartik? Having said that, Hera Pheri happens to be a remake of the 1989 Malayalam film Ramji Rao Speaking. The sequel to Hera Pheri, titled Phir Hera Pheri was released in 2006.

(The above story first appeared on LatestLY on Nov 12, 2022 09:35 PM IST. For more news and updates on politics, world, sports, entertainment and lifestyle, log on to our website latestly.com).