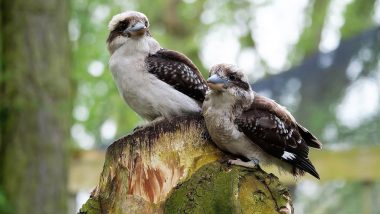 A power outage can be annoying because it can cause such inconvenience in case of no backup. Recently a residential area in Perth of nearly 1000 houses faced a massive power outage. But the reason for this sudden loss of electricity is shockingly funny. Apparently two horny birds, who were making love near the high-tension electrical wires not just died with the shock but also resulted in the massive blackout! A pair of kookaburras having sex got too close not only to each other but also the wires and thus several houses suffered due to loss of electricity. It took a few hours to restore the power supply in the area. Crows Have Sex With Their Dead? New Study Points Funeral Conducting Birds Have Some Weird Behaviour!

The incident took place near Albion Place and Fair Lane Drive in Carine in Perth. As per reports, a man walking his dog near the corner saw a pair of kookaburras near the power lines. As the birds got frisky, they got too close to the electrical equipment. It trigged "two big flashes" and a series of loud noises. Within a few moments, the power in the area went out. More than 1000 homes in Perth faced the electricity cut. Same Sex Flamingo Couple’s Romance Is the Best Viral Moment This Pride Month, Love Birds May Even Raise a Chick Together.

The birds zapped out and died on touching the high-tension power lines which carried a current of anywhere between 155,000 and 765,000 volts. The process of restoration took a while because of the pole where the birds chose to make out. Western Power spokesman Paul Entwistle who took charge of restoration said in a news report, "The pole that they decided to make their love nest was pretty close to a substation. Just because of protocols we [had] to have a bit of a look around the sub-station too to make sure there was no flash-over that's gone back into the substation." Well, it is unfortunate that the 'spark' between these kookaburras ended with another massive 'spark'.

(The above story first appeared on LatestLY on Jun 18, 2019 09:58 AM IST. For more news and updates on politics, world, sports, entertainment and lifestyle, log on to our website latestly.com).