An old HP India ad from 2018 has resurfaced on the internet as it perfectly fits in the "Vocal for Local" initiative. Titled #GoLocal, the ad is about a woman selling diyas by the roadside and a little boy helping her to sell off all her diyas by advertising about her. 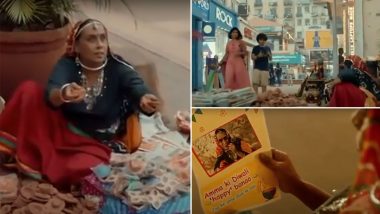 The festival season of Navaratri 2020 is ongoing and it marks the enthusiastic beginning of the entire festive season until the end of the year. A little post Navratri we will see the celebration of Diwali which is now less than a month away. Diwali 2020 starts November 14 and it is a time when people step out to shop, be it simple diyas, lanterns, clothes or electrical appliances. Amid this festive season, special ad campaigns have already started appearing on TV. But an old HP India ad from 2018 has resurfaced on the internet as it perfectly fits in the "Vocal for Local" initiative. Titled #GoLocal, the ad is about a woman selling diyas by the roadside and a little boy helping her to sell off all her diyas by advertising about her. We recently saw the turnout and support for Baba ka Dhaba food stall in Delhi, a part of the entire local for vocal movement. This movement needs to emulate into other areas as well and local for vocal must continue offline as well.

The ad starts with a woman sitting by the roadside selling diyas and a boy along with his mother passing by. After the mother refuses to buy from her, the boy comes in later and takes a few diyas. He also takes a picture of her, wishing her a Happy Diwali. The woman says, it would be a 'Happy' Diwali only when all her diyas are sold off. The boy then goes home, prints out a pamphlet with the woman's picture and pastes it everywhere. People start gathering at her stall and all her diyas get sold. The entire idea is to Go Local which deem fits with the current initiative urged by PM Modi of "Vocal for Local." People lining up outside Baba ka Dhaba in Delhi, early this month was one of the examples we saw of the success of choosing local and the happiness it sparked on the people.

The ad beautifully conveys the message, right? The idea is to pick up local stuff over branded goods and products. Now with more amplifying for the movement that gets a proper phrase to it, the above ad is perfect to rerun on our TV sets just about now. So the next time you step out to buy diyas, lanterns or any kind of decor do buy from the local stores and make others known about them as well.

(The above story first appeared on LatestLY on Oct 19, 2020 04:21 PM IST. For more news and updates on politics, world, sports, entertainment and lifestyle, log on to our website latestly.com).