Baba Ka Dhaba in Delhi Gets Immense Response From People, Pics and Videos of Crowds at Local Food Stall Prove The Power of Social Media; Check Baba's Message to Everyone

Pictures and videos of crowds gathering to eat at this stall in Malviya Nagar are now being shared online with #BabaKaDhaba a top trend on Twitter. Such is the power of social media and the old man Baba is grateful to everyone. He has given a wonderful message to support such local vendors in all cities. 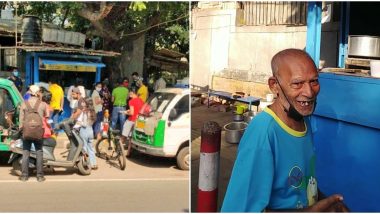 Social media is a great tool if used effectively. A 80-year-old couple in Delhi struggling to make ends meet and survive in this tough situation of pandemic went viral last night. As other users joined in and made it go viral, this morning people lined up at this local food stall to support them. Pictures and videos of crowds gathering to eat at this stall in Malviya Nagar are now being shared online with #BabaKaDhaba a top trend on Twitter. Such is the power of social media and the old man Baba is grateful to everyone. He has given a wonderful message to support such local vendors in all cities.

This 80-year-old couple were earning their daily bread and butter by running their food stall. But due to the lockdown, their daily earning was affected. In a video that showed their plight, the 80-year-old was teary-eyed because they had no customers. They had prepared all the food but there was no one to sell it too. As the video went viral, people urged others staying in Delhi to visit Baba ka Dhaba and do their bit. Twitter users named Madhur (@ThePlacardGuy) and Ashutosh (iashutosh23) decided to help around the couple as a lot of people gather to eat here today. This morning AAP MLA Somnath Bharti paid a visit to the stall and the pictures showed the same old couple happily smiling. He even tweeted he would take care of them and other similar people. Today, many others have gathered and posting pictures, videos of eating at Baba Ka Dhaba, so much so that #BabaKaDhaba is a top trend on Twitter. Tweet About Sad Dad At Empty Donut Shop in Texas Goes Viral, Twitterati Helps to Spread Happiness.

This video completely broke my heart. Dilli waalon please please go eat at बाबा का ढाबा in Malviya Nagar if you get a chance 😢💔 #SupportLocal pic.twitter.com/5B6yEh3k2H

Social media platforms not only help you to engage with customers, but also highlight the right content that helps the nation.

Here's a Video of People Gathering Outside Their Stall

Visuals: People outside an eatery in Malviya Nagar after a video of the hardship faced by of its owner went viral on social media#BABAKADHABA pic.twitter.com/xMNTy4E7d7

How it started: How it ended: pic.twitter.com/9dyJguCaNP

Seeing all this lovely response within a day, Baba was left with a smile. He gave a positive message to everyone asking everyone to help similar local vendors in their respective areas.

It is indeed beautiful to see Baba and his wife smiling today and get such a lovely response. This is an instance that proves social media can do wonders if used effectively. This story gives a larger message that we should step out and support the locals instead. It holds true in not just the case of food but even in other areas. Let us help other such voices who haven't yet reached the internet.

(The above story first appeared on LatestLY on Oct 08, 2020 12:44 PM IST. For more news and updates on politics, world, sports, entertainment and lifestyle, log on to our website latestly.com).