Humpback Whale Swallows In and Spits Out ‘Lobsterman’ Michael Packard; Diver Recalls 'It Was Completely Dark'

A giant humpback whale swallowed US lobster diver for about 30 to 40 seconds and then spitted him out. The horrific incident took place on Friday. 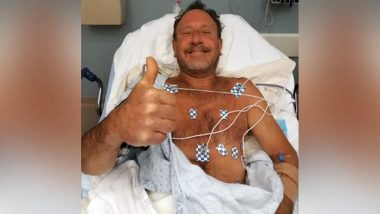 A licensed commercial lobster diver, Michael Packard, 56, was diving for lobster off the coast of Provincetown, Massachusetts on Friday. Suddenly, a giant humpback whale swallowed him for about 30 – 40 seconds and then spitted him out. The veteran lobster diver has been left with a suspected dislocated knee. As per the Cape Cod Times report, Packard said that when the water visibility at about 20ft, he and his crewmate took their boat, the Ja'n J, off Herring Cove on Friday morning. But later, the horrific incident happened.

Packard was admitted to Cape Cod Hospital in Hyannis and after his release, he recalled the whole incident, he said, “All of a sudden, I felt this huge shove and the next thing I knew it was completely black.” He added, “I could sense I was moving, and I could feel the whale squeezing with the muscles in his mouth.” However, he hadn’t suffered any serious wounds, and initially, he thought a great white shark has swallowed him, but he couldn’t feel any teeth. But somehow, he had quickly realised that he had been swallowed by a whale.

“I was completely inside; it was completely black,” Packard explained. “I thought to myself, ‘there’s no way I’m getting out of here. I’m done, I’m dead.’ All I could think of was my boys — they’re 12 and 15 years old,” he added.

Packard, who lives in Wellfleet, was wearing scuba gear and thus, the whale didn’t like it. “I saw light, and he started throwing his head side to side, and the next thing I knew I was outside (in the water),” stated Packard.

Packard’s sister, Cynthia Packard said, “Thank God, it wasn’t a white shark. He sees them all the time out there. He must have thought he was done.”

According to the World Wildlife Fund, the global population of humpback whales is about 60,000. They can weigh about 36 tons and can grow to as long as 50ft (15m).

(The above story first appeared on LatestLY on Jun 12, 2021 04:22 PM IST. For more news and updates on politics, world, sports, entertainment and lifestyle, log on to our website latestly.com).