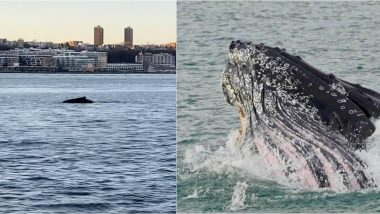 A majestic humpback whale was spotted swimming in the Hudson River on Monday near the Statue of Liberty. The photos were taken from a boat on New York Harbour in New York City. The U.S. Coast Guard confirmed reports of the sighting. The video footage shows the whale spouting water from its blowhole and swimming south down the river. On Tuesday, the whale was seen again, with sightings reported near the Statue of Liberty, the One World Trade Center and other sights off New York Harbor. Dolphins Spotted Splashing in Water off Vashi Creek Near Mumbai! Watch Rare Video of Mammals Going Viral.

Gotham Whale, a New York city research and advocacy group, said it identified the whale as NYC0089. They tweeted saying, "NYC0089 is a returning #HumpbackWhale first spotted in June 2018." The tweet further said that the whale was recently photographed this whale on November 27. Bjoern Kils who took pictures of the creature he said it was about 40 feet long. He said, "The whale just blew about 1,000 feet off my bow!" He said he saw the mammal at about 10 a.m. ET near Ellis Island. Bjoern owns New York Media Boat, transports news crews and magazine photographers. Video of Humpback Whales Swimming at Bombay High Sends Netizens into Frenzy, Is The Clip True or Fake?

NYC0089 is a returning #HumpbackWhale first spotted in June 2018. Our Associate Researcher, @ackerman_celia, and @araslich recently photographed this whale on 11/27/20 while aboard the @APCruises. pic.twitter.com/ew1Gl68y5y

Whale in Front of the Statue of Liberty!

As he spotted the humpback whale, he tried to warn other vessels to make space for it fo it could swim safely through the Narrows tidal strait separating Staten Island and Brooklyn and out into the Atlantic Ocean. He alerted them as Staten Island Ferry, a cargo ship and several tug boats headed in the direction. In recent years, more than a dozen humpback whales have been seen in New York waters, according to state data. Some have been seen just 550 yards from the beach in Rockaway, Queens.

Whale sightings have common in New York City in recent years after the Hudson River cleanup. Environmentalists said that the growing menhaden fish population in New York has brought whales back to the area. However, a number of whales have died after being entangled due to shipping in New York's busy waterways

(The above story first appeared on LatestLY on Dec 10, 2020 11:14 AM IST. For more news and updates on politics, world, sports, entertainment and lifestyle, log on to our website latestly.com).