Humpback Whale Appears to Eat a Sea Lion in This Rare Photograph, But Here's The Truth

A wildlife photographer Chase Dekker was awestruck on learning that he had clicked the photo of a "once-in-a-lifetime event" while whale-watching in California. The 27-year-old had captured a humpback whale "swallowing" a sea lion from a boat of whale watchers. 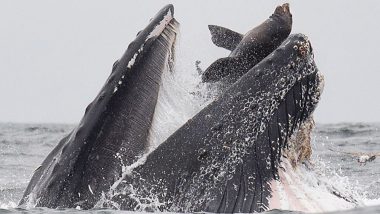 A wildlife photographer Chase Dekker was awestruck on learning that he had clicked the photo of a "once-in-a-lifetime event" while whale-watching in California. The 27-year-old had captured a humpback whale "swallowing" a sea lion from a boat of whale watchers. The mammals were feeding on anchovies at the surface of the water when the whale ended up with something big in its mouth. However, it is believed to have escaped the clutches quickly. Ever Heard a Whale Sing? Scientists Record 'Song' of Rare North Pacific Right Whale.

Chase is "more than 100% confident" that the sea lion swam away even though it ended up in the whale's mouth. Radio 1 Newsbeat quoted wildlife photographer Chase Dekker, "It wasn't a huge group, only three humpback whales and about two hundred sea lions. We've seen it all the way up to 100 whales with 3,000 sea lions, so it can get really insane. We were watching them feed for a long time and then eventually the event - as I call it the once-in-a-lifetime event - happened, and I still can't believe it." 6 Endangered Right Whales Found Dead in Canadian Waters, One Died of Collision with Ship.

He added saying, "I had about a split second while the whale was coming up to really comprehend that the sea lion was on top of the whale before shooting the rest of the sequence." He also shared the photo on his Instagram page.

Here is The Photo That Chase Dekker Clicked:

The next day, Chase posted another photo, describing the scene of five humpbacks feeding in close quarters with around 300 sea lions. He added that this time no sea lions came into the way. Chase is a native of Monterey Bay and works also as a marine biologist and photographer on Sanctuary Cruises. Fifty Dead Pilot Whales Wash Up on an Iceland Beach and No One Knows Why!

According to the Maui Ocean Center, "Humpback whales open their mouths wide and take in large amounts of water while feeding. They do it to filter out tiny ocean creatures like plankton and krill, pushing the water back out. A humpback whale can hold up to 5,000 gallons of water in its mouth. As two of these animals are feeding together, the whale accidentally catches a sea lion, but no one has ever captured the moment on camera.

(The above story first appeared on LatestLY on Jul 31, 2019 09:14 AM IST. For more news and updates on politics, world, sports, entertainment and lifestyle, log on to our website latestly.com).