If you decided to give yourself some K-Pop music treats, you have arrived at the right place. In this article, we bring you K-Pop groups to listen right now! BTS, Blackpink, GOT7 and more, here are five K-Pop bands every newbie should follow to learn about the music genre more. 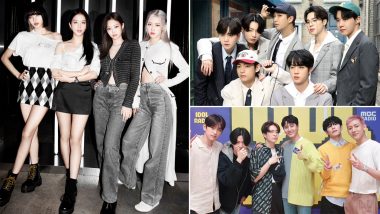 Korean Pop, aka K-Pop, refers to the pop music scene in South Korea. The artists have taken the world by storm in recent years. There are so many music bands who with their style, music, lyrics and everything else has developed a cult fandom. You could be one of those people who has been hearing about K-Pop all over the place lately, especially with BTS being nominated at the Grammys making history to become the first K-Pop group ever to receive the prestigious nomination. And finally, you decide to give yourself over. Well, you have come to the right place as someone who is new to the music genre. For the growing obsession, K-Pop is not just about the music, and that is why it is so addictive—slick choreography and insane music videos are also part of Hallyu’s—the Korean cultural wave spreading around the world. In this article, we bring you K-Pop groups to listen right now! BTS, Blackpink, GOT7 and more, here are five K-Pop bands every newbie should follow to learn about the music genre more.

We cannot begin talking about the K-Pop bands without mentioning, BTS! The Bangtan Boys is arguabely ‘the’ most popular K-Pop group around the globe. Reaching number one on Billboard’s Hot 100 with its new song Dynamite, earning a Grammy’s nomination for the song, redefining the expression of love with ‘I Purple You,’ amazing fashion sense, the popularity of the members with Jungkook declared as Sexiest International Man Alive 2020 by People’s Magazine, the band is only achieving newer heights. Pretty impressive, isn’t it? With three rappers, RM, Suga and J-Hope and four singers, Jin, Jimin, V and Jungkook, the group mix hip-hop, pop, EDM and rap into their body of work.

Considered one of this generation’s most popular K-Pop acts, every song Blackpink releases becomes a hit. It not only songs, even an announcement of the tour, or fan meet earns a massive response, from the Blinks (their fan club). One you listen to Jennie Kim, Lisa, Jisoo and Rosé, it will get stuck in your head for days. They have made history in the music charts with their dynamic and bold songs. Besides, this year, the band have also released the first album.

Another group of seven boys who are just having an absolutely crazy time. Their popularity is increasing with each passing day. What really makes them so lovable is their group chemistry; they have got that funny brotherly energy in any given interview, and you will feel part of the band, once you binge-watch them. Their latest song, ‘You Calling My Name’ becomes their fastest MV to surpass 100 million views.

Monsta X debuted with a youthful rebellious image. Their first music video was literally about them breaking out of jail. Quite a rebel! They eventually grew up and their image matured as well, earning massive followers from around the globe. Their iconic sound, powerful dance moves while exploring new themes and concepts are mindblowing.

Crated on the appropriately titled, ‘Find Momoland’ in 2016, the K-Pop girl gang has been killing it ever since. Unlike many groups, the member lineup has slightly changed over the years, but with their amazing music, they continue to prove that can still churn out consistently catchy songs.

There are many other K-Pop bands too that are arguably just as worth as listening to the above. The list surely covers only a small percentage of the great K-Pop groups you can listen to. As it is only a beginning for you, eventually you will learn more and all the fan page names, the different phrases that other followers use, its meaning and many more. All are unique and appealing in their own way. So, keep exploring!

(The above story first appeared on LatestLY on Nov 27, 2020 04:22 PM IST. For more news and updates on politics, world, sports, entertainment and lifestyle, log on to our website latestly.com).