BTS & the Beauty of Words! Not Only ‘I Purple You,’ 10 Words, Phrases & Meanings You Should Know to Join the K-Pop ARMY

BTS and its beauty of words are not only seen in their music, but in the greater form of fandom. Not only ‘I Purple You,’ here are ten words, phrases and meanings you should know to join the K-Pop ARMY. 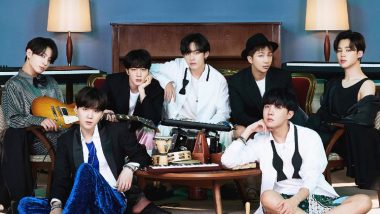 There is no other way to spin in, BTS purples ARMY. Ever since the South Korean band debuted in June 2013, each member of the Bangtan Boys has poured all their hard work into their music, choreography and overall performance. Their massive followers across the world is a proof why the band is such a success, amid so many other popular musicians, singers and bands. For first-timers, becoming a fan of BTS can be a bit overwhelming initially. While bopping along with the music and crushing over their adorable looks can be fun, you also need to juggle all the lingo BTS ARMY, and members themselves have been using. BTS and its beauty of words are not only seen in their music, but in the greater form of fandom. Not only ‘I Purple You,’ here are ten words, phrases and meanings you should know to join the K-Pop ARMY.

On November 13, it was the fourth anniversary of Kim Tae-Hyung, known by his stage name V spreading the love with the famous phrase, ‘I Purple You.’ Fans across the social media purple-ed the platforms celebrating the phrase of love. RM, Jin, Suga, J-Hope, Jimin, V, and Jungkook have been dominating the globe with their songs, charm, fantastic music, fashion, basically, everything. One can imagine their popularity, amassing a fanbase over seven years leads to some jokes and words, that only BTS ARMY can understand. So, if you are someone, too new to the ARMY, but are crushing over the band members and their awesome music, here are words, phrases and its meanings you should know for all the cultural references.

1. Ayego: It is a Korean word, which refers to a ‘cute’ form of speaking or acting that frequently involves using a higher voice, making cute faces, and using hand gestures. The word is commonly used among K-pop idols for fanservice.

2. ARMY: Do you know why ARMY is capitalised? It is actually an acronym that stands for Adorable Representative MC for Youth. This is why, we see BTS fans referred to as ARMYs, or as the BTS ARMY. The reason the members of the band came up with it, as noted by many media outlets, is because an army is never without its armour, which in this case, is BTS themselves.

3. BTS: You know who BTS is, but do you know the meanings of their name. In Korean, BTS stands for Bangtan Sonyeondan. In 2017, the band announced that BTS would also stand for “Beyond the Scene.” Big Hit explained that the new name, “symbolises youth who don’t settle for their current reality and instead open the door and go forward to achieve growth.”

4. Fancam: It is simply a recording of a K-Pop group’s performance focussing on a single member. Elite Daily reported that BTS member Jimin holds the record for the most-viewed K-Pop fancam in the history for his May 2018 performance of ‘Fake Love,’ on M Countdown.

5. FESTA: It is the two-week period right before BTS’ anniversary on June 13. During this time, the group gifts ARMYs with new photos, some amazing BTS dance practice videos, unreleased songs, and more. BTS FESTA celebration ends with a video posted on the anniversary day, in which the members come together to answer fan questions, discuss their journey and share the love.

6. I Purple You: The most famous phrase that potentially changed the way of expressing love was introduced by BTS member V. While explaining the meaning of the phrase to his huge fans, he said, “Purple is the last colour of the rainbow, so it means I will trust and love you for a very long time.”

7. HYYK: This acronym means “The Most Beautiful Moment in Life,” the second era in BTS discography from 2015 to 2016. The Hs and Ys stand for, “Hwa Yang Yeon Hwa,” the Korean phrase meaning the same thing.

8. Maknae: A Korean term used to refer to the youngest person in a group. BTS’ maknae is Jungkook, who was born in 1997.

9. Tannie: Tannie or Yeontan, is V’s dog, who is equally adored by both the ARMY and members of BTS. Whenever, Tannie makes an appearance on social media; it is always an event on that day.

10. Agust D: Well, it’s Suga! He adopted Agust D as a second alias for his solo achievements. He came up with it by attaching the letters DT, which stands for his hometown, Daegu Town, to Suga, and then flipping the whole thing backwards.

These are only a few, out of many words and phrases that both BTS and its ARMY came up with over the years. Once you know the basics, you are good to go with the ARMY and eventually, you will come across with many other words and phrases (BTS glossary) the band use in their music to enjoy them even more.

(The above story first appeared on LatestLY on Nov 14, 2020 02:58 PM IST. For more news and updates on politics, world, sports, entertainment and lifestyle, log on to our website latestly.com).