Lilly Singh Apologizes for Her Controversial Comment About Turbans

Famous YouTuber Lilly Singh has apologised for making a "disrespectful" comment about turbans during the last episode of her show. On Friday, Lilly apologised on Twitter for her comment made on the episode of the show, 'A Little Late With Lilly,' and called it "disrespectful and problematic. 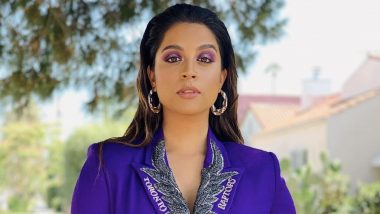 Famous YouTuber Lilly Singh has apologised for making a "disrespectful" comment about turbans during the last episode of her show. On Friday, Lilly apologised on Twitter for her comment made on the episode of the show, 'A Little Late With Lilly,' and called it "disrespectful and problematic."During a recent visit to actor Jessica Alba's home, the 31-year-old vlogger met Alba's two young daughters -- Honor and Haven-- who were both wearing twisted towels on their heads, according to People."They're really good at being cool, especially with people that they geek out over like you," Alba told Singh during the show. German YouTuber’s Base Jump off a Towering Antenna Into a Sea of Dense Fog Will Scare the Hell Out of You! (Watch Viral Video)

"They're trying to be cool about it. I was like, 'Lilly's downstairs,' and they're like, 'Lilly's downstairs?' And I was like, 'Yeah, come say hi.' They wear the towels, the turbo twists, so they like look super not cool in the turbo twists but it dries their hair really quickly, so it's very practical. I think they definitely had the turbo twists on when they said hi.""They look like my Punjabi friends," Singh responded. "It's fine."Sooner her comments faced backlash from viewers, which resulted in Singh to reflect and ultimately apologize for her words."Hey friends, my timing is very poor," she wrote. "I just made a post about dealing with hate online because I saw a tweet from someone making fun of my outfit and I was completely oblivious to a larger issue happening.""In a recent episode of my show, I stupidly made a comparison about turbans that I'd like to apologize for," she said. YouTuber Akatsukito’s Account Gets Terminated After Video of Him Abusing & Killing His Cat Sparked Outrage Online

"My guest was explaining how her kids were embarrassed I saw them with towels twisted on their heads and I said 'don't worry, it's like my Punjabi friends.' At the moment, my thought process was 'don't be embarrassed! I think that's dope.' But in hindsight, I recognize that was a disrespectful and problematic joke to make that has a lot of painful history behind it. And I'm very sorry."She continued, "This was the first episode of the show I ever taped and I was very nervous, doing improve that wasn't well thought out. I'm incredibly sorry to those I hurt with that comparison. And I want to make it clear that I'm incredibly grateful to the people who took the time to bring this to my attention and educate me on the matter; I appreciate that you approached me with love and patience.

A very important and heartfelt apology. I’m sorry. And thank you for helping me grow 🙏🏽❤️ pic.twitter.com/Q2JBI2VEDj

I don't wear a turban and I haven't lived that experience and so I really value people giving perspective. I'm grateful that this was a teachable moment instead of another opportunity to divide and attack."Singh concluded, "This is all new to me. I'm still learning and growing. I know the line for comedy is subjective so I can only do what I feel is right. And in this case, taking full ownership and apologizing feels right. No ands, ifs or buts. It was wrong. I hope you continue to make space for me to make mistakes, and improve from them. Aside from these words, I've also taken the action to ensure my stupid joke is removed from the episode and online clips. Thank you and here's to a life of growth and improvement."