'LUCIFER' Behind Deadly Explosions Across Nations? Viral Conspiracy Theory Points to First Letter of Each Nation Spelling Out the Devil's Name After Recent Gas Blast in Russia (Check Tweets) 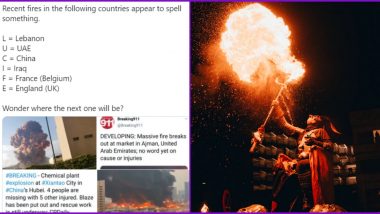 The world is far from being a better place these days. While nations battle with the pandemic of coronavirus, there are other disastrous situations taking place in different parts of the world. The fire explosion in Beirut, massive fires in UAE's market, an explosion at a chemical plant in China and most recently, the explosion at a gas station in Russia's Volgograd. All of these severe disasters has churned out a conspiracy theory that the first letters of countries where this explosion took place spell out LUCIFER, the devil. So it is a devil's doing to the world, is something that netizens cannot stop wondering.

The year 2020 has seen several conspiracy theories to it, most of them pointing it to the end of the world. Right from the prediction of the coronavirus in books and series to Mayan calendar reference of end of the world, 2020 is seeing everything going bad. Just a day after the devastating fires in Lebanon, there was a fire in the Ajman market in UAE. There was also an explosion at a chemical factory in China's Wuhan city. It followed by a fire at an Iranian industrial facility. Severe forest fires raged in Marseille region of France and another blaze broke out in at a plastics factory on Tyseley Industrial Estate across Birmingham, England. The most recent fire incident comes from Volograd, Russia. In most places, there has been a loss of lives and severe damage to property, Lebanon being the worst-affected.

Now a Twitter user has pointed out a theory that the first letter of these cities spell Lucifer. For those unaware, Lucifer is one of the names for the Devil in the Holy Bible. The Devil, also referred to as Satan, is best known as the personification of evil. The Simpsons Predicted Beirut Explosion As Well? Netizens Find Similarities Between American Sitcom's Episode of Homer Exploding Springfield and Lebanon Disaster (Watch Pics and Video).

Recent fires in the following countries appear to spell something.

Wonder where the next one will be? pic.twitter.com/7I2Z71LJnD

People added on the incident from Russia and completed the name Lucifer. The tweet is going viral and check how some people have reacted.

That cannot be coincidence!

What do We Get?

Holy shit. Add Russia to the list and what do you get? https://t.co/uZMB6VyNx9

If you take the first letter of the places where there has been a fire or explosion. Do you know what it spells out? LUCIFER!! Hmm..makes you think?

While some others refuted the theory saying it was a random pick and choose and there were more fires from other places too. It is just another conspiracy theory doing rounds and has captivated some people. What do you think? Do you believe it to be Satan's doing?

(The above story first appeared on LatestLY on Aug 11, 2020 01:46 PM IST. For more news and updates on politics, world, sports, entertainment and lifestyle, log on to our website latestly.com).