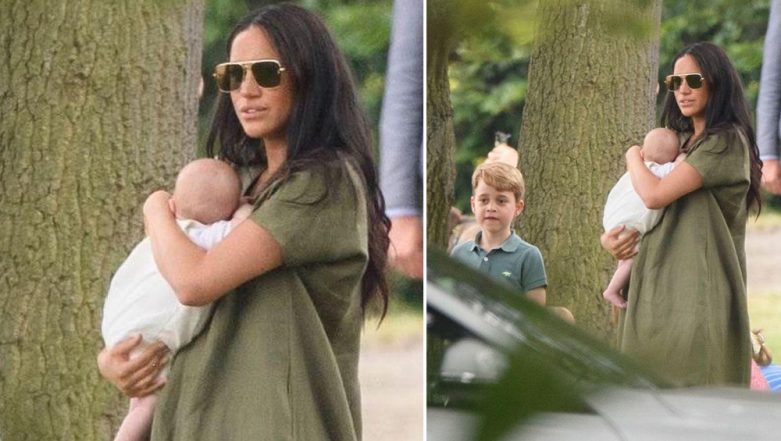 The Duchess of Sussex, Meghan Markle has recently given birth to a boy, Archie Harrison Mountbatten-Windsor and fans are looking up for every occasion to catch glimpses of the royal baby. The new mother is popular for making headlining appearances and the recent one, were no short of it. Meghan was spotted cradling her two-month-old son, to watch Prince Harry and Prince William compete in the King Power Charity Polo match. And it was the way the 37-year-old was holding her baby that pissed the people online. In a recent viral Instagram picture, Meghan was mom-shamed and brutally trolled by the netizens for the way she “awkwardly” carried Archie. Prince Harry's First Father's Day With Baby Archie Gets Captured in an Adorable Picture.

It was Archie’s first public outing, with Mom Meghan, who was accompanied by Kate Middleton and her three children Prince George, Princess Charlotte and Prince Louis. Despite the royal outing, which looked every bit of relax and casual affair, fans were quick to launch an online attack on the former Suit actress. Her appearance at the Polo match went viral, after numerous media outlets published her images with baby Archie. Meghan Markle Finds Herself in the Middle of Another Controversy, This Time Over a Pair of Jeans!

Prince George is spotted with Meghan and his cousin Archie Harrison at the polo ♥️👑 LINK IN BIO for live updates.

"Meghan looks like she's about to drop him," one user wrote on Instagram. "She should have put a hat and socks on the poor baby!!" noted another. "Someone teach that actress how to hold a child, good grief," another user cruelly said. However, the mom-shaming prompted many people come in support of her. "She could be a natural at home but she's probably trying to shelter from the cameras and the judgment," reads a comment. Even people who are not royal fans gave it back to the critics. "I seriously dislike this girl but you can't put her down because she's not a pro at holding a baby. She's still new to it and we've all held out babies awkwardly," a commenter noted.

The Duchess of Sussex was spotted wearing a casual and floaty Khaki green dress, which she accessorised with a pair of sunglasses. This recent criticism came in after Meghan sparked debates when her bodyguards told fans not to take her pictures to watch Serena Williams at Wimbledon. Again the polo match is supposed to be the first outing when the Duchess of Cambridge and Sussex were seen together as a family. Otherwise, Meghan and Kate mark rare joint appearances at official engagements arranged by the entire royal family.