Mirzapur Season 2, the hit crime drama series 'Mirzapur' has released on Amazon Prime on October 23 and fans are a little too excited. However, in the meanwhile, Mirzapur 2 full episodes have leaked online on Telegram. As the news spread, Twitter, like always have generated funny memes on the topic with popular dialogues of the series. 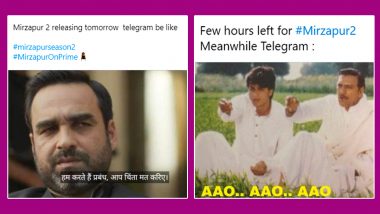 Mirzapur Season 2, the hit crime drama series has released on Amazon Prime on October 23 and fans are a little too excited. After the first season being a huge hit, Ali Fazal, Vikrant Massey, Shweta Tripathi, Divyendu Sharma, Pankaj Tripathi and Shriya Pilgaonkar are here to keep the audience on their toes. However, in the meanwhile, Mirzapur 2 full episodes have leaked online on Telegram and other online platforms and are available for free download. As the news spread, Twitter, like always have generated funny memes on the topic with popular dialogues of the series that will leave you laughing. The series is available for download on Filmyzilla, TamilRockers and many other platforms. Ahead of the release of Mirzapur 2, fans had taken to Twitter showcasing their excitement with funny memes.

Before the release of the series, there were worries that it would be pushed back to 2021 due to COVID-19 pandemic. However, producers of Mirzapur season 2 did not disappoint fans who were eagerly waiting for its release. Meanwhile, people have taken to Twitter funny memes and hilarious GIFs on how everyone is logging into Telegram to watch the series and not on Amazon Prime where it was originally made available. While the issue of piracy is a serious issue that affects the entertainment industry, Twitterati has generated a truckload of jokes on the current situation. Mirzapur 2 Meme Templates For Free Download Online: Famous Dialogues and Scene Photos From Trailer to Make Funny Memes and Jokes.

Twitterati Knows it All!

Everyone is on Telegram it Seems!

Watch it from telegram 😶 pic.twitter.com/JTZpKjqSe3

Telegram Has No Chill!

#mirzapurseason2 is only Available for Prime members only.

*Me searching for mirzapur season 2 on telegram*

HAHA Telegram is in Trouble!

The first two episodes were released October 22 by Amazon Prime and without 24 hours it was available on torrent sites for free download.  There are various measures being taken by the film fraternity to stop the illegal practice of leaking movies and series on the unauthorised platforms, but not much has changed. Many often prefer to watch them online on these platforms or download from there and watch it later.

(The above story first appeared on LatestLY on Oct 23, 2020 10:22 AM IST. For more news and updates on politics, world, sports, entertainment and lifestyle, log on to our website latestly.com).