After Lionel Messi scored a stunning free-kick against Chile in Copa America on June 15, 2021, the football star's biggest fan Suzy Cortez heaped praises on him. The former Miss BumBum called Lionel Messi the 'best in history'. 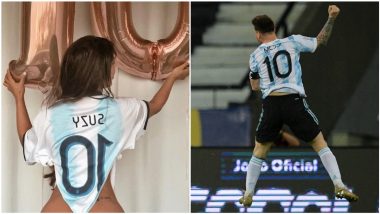 Lionel Messi is widely regarded as one of the greatest players in football history. The Argentinian football star enjoys a major fan following on social media. And one of his biggest fans happens to the sexy Brazilian model and former Miss BumBum, Suzy Cortez. She is a die-hard fan of the famous FC Barcelona player. Time and again, the former Playboy model has dedicated several photographs and even a couple of tattoos for the football star.

Recently, the hot Brazilian model has heaped praise on Lionel Messi after he scored a stunning free-kick against Chile in ongoing Copa America 2021 on Monday. However, Chile also hit back to earn a 1-1 draw in the match.  But that didn't stop Suzy from praising her idol. She took to her Twitter handle to reshare a picture of Lionel Messi shared by Copa America's official Twitter handle and wrote, "O melhor da história. (The Best In History)." Take a look at Suzy Cortez's latest tweet here:

This year’s Copa America tournament is taking place in Brazil and thus, earlier the Brazilian model had welcomed the Argentinian football player by posting a spicy photograph of her on Twitter. In the picture, the model can be donning an Argentinian football club jersey with her name written on it, followed by Lionel Messi’s No. 10.  She can be also seen flaunting her pert derriere in the still. Take a look:

In 2016, Suzy hit headlines when she stripped naked and painted her body as Messi’s FC Barcelona’s jersey. Later, she was also blocked by Messi's wife Antonela Roccuzzo for bombarding the footballer with her sexy photos and messages.

Suzy won the Miss BumBum competition first time in 2015 and then again in 2019. Earlier, she had inked Lionel Messi’s name in her body. Talking about the same, according to The Sun report, Suzzy said, “I'm sure the best player in history will win for the sixth time the Ballon d'Or and the 2019 Fifa The Best award.” She added, “I anticipated the celebration by making a tattoo with the name of Messi and the No. 10 along with the shield of FC Barcelona to celebrate the 120 years I love very much.”

(The above story first appeared on LatestLY on Jun 16, 2021 02:30 PM IST. For more news and updates on politics, world, sports, entertainment and lifestyle, log on to our website latestly.com).