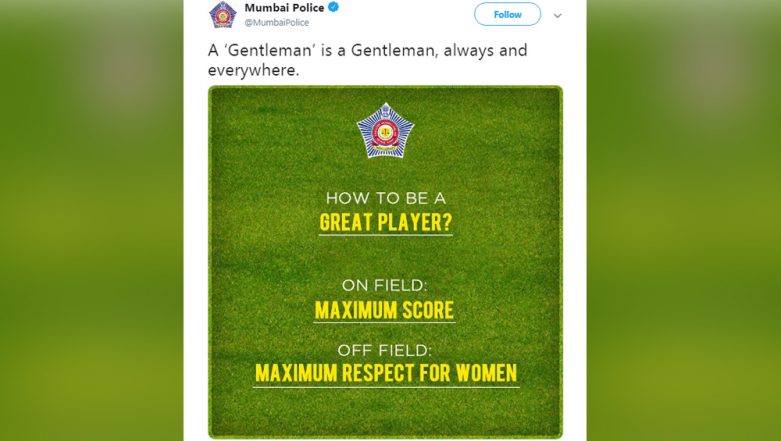 The infamous and controversial Hardik Pandya and K.L. Rahul's episode from Koffee with Karan has been criticised all across the country for sexist remarks made by the two cricketers. They are being talked about their casual misogynist comments they made on the show and bragging about his "hook-ups" with several women. To add to the criticism, a tweet by Mumbai Police is going viral on social media. Mumbai police are known to spread awareness about several issues like rash driving, stalking etc. by sarcastically pegging on the current trending topics. Their quirky takes have usually been very popular and re-tweet worthy, just like the latest one that is being touted to taking a sly dig at Hardik Pandya- KL Rahul's Koffee with Karan Controversy. They captioned their tweet with- "A ‘Gentleman’ is a Gentleman, always and everywhere." This is What Karan Johar Has To Say About Hardik Pandya and K L Rahul Episode on Koffee With Karan Season 6.

A ‘Gentleman’ is a Gentleman, always and everywhere. pic.twitter.com/oANwZH2WwY

While the tweet didn't directly talk about Hardik Pandya and KL Rahul, twiteratti in no time began to tag Hardik Pandya and tell him that it is him the Mumbai Police is talking about. Take a look at some of the reactions from other Twitter users.

The pun only Indians will get.

Mumbai Police for the win!

Mumbai Police Twitter account is always lit and perhaps there is no such issue that the Mumbai Police haven't a stand against. The tweet has already gone viral and receiving a lot of retweets.