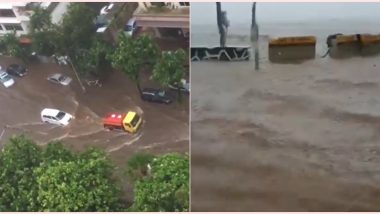 It’s a devastating situation in the city of Mumbai. A red alert has been issued for “extremely heavy” rainfall for the Mumbai Metropolitan Region, as heavy showers continue to pour for over 24 hours, crippling the city’s lifelines. According to the latest reports, at least four people have been killed, and one went missing. Incidents of house collapse, tree felling and cases of electric short-circuit were reported. People have taken to social media showing waterlogged streets and flooded rains in the city, as heavy rainfall continues to lash the city of Mumbai. Police officials have advised citizens to stay indoors. In this article, we bring you pictures and videos that show how heavy rainfall has created havoc across the city.

Videos and pictures, uploaded on Twitter show the intensity of rainfall combined with rough winds that prevailed in the city. Below, in this article, check out the clips and photos that show the horrific situation in the streets and lanes of Mumbai, caused by heavy rainfall and strong wind.

Nature is not sparing Mumbai today. At its worst. pic.twitter.com/PwTnC5KXm8

Praying for the well being of mumbai & mumbaikars..

My Home in Goregaon West pic.twitter.com/2K7vWuRzFS

IMD issued a red alert for Mumbai on August 5, 2020. However, red alert for Thane, Palghar, Raigad, Pune, Ahmednagar and Nashik districts will continue till Thursday, August 6, 2020. People are advised to stay indoors and go out, only if necessary. The department has forecast spells of more heavy to very heavy rainfall for today, August 5, 2020.

(The above story first appeared on LatestLY on Aug 05, 2020 08:25 PM IST. For more news and updates on politics, world, sports, entertainment and lifestyle, log on to our website latestly.com).