Heavy rains have lashed Mumbai causing waterlogging in many low lying regions. People have taken to social media platforms sharing photos and videos flooded streets near them. The Indian Meteorological Department issued an advisory for Mumbai asking people to not leave their homes unless for an emergency. 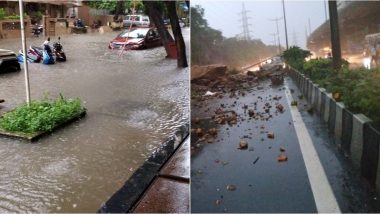 Heavy rains have lashed Mumbai causing waterlogging in many low lying regions. An overnight spell has resulted in flooded roads. People have taken to social media platforms sharing photos and videos flooded streets near them. The Indian Meteorological Department issued an advisory for Mumbai asking people to not leave their homes unless for an emergency. IMD had said that high tide of 4.51 meters is expected at 12:47 pm in the city. People are also advised to not go near beaches. People have been sharing photos of waterlogged streets and the monsoon view outside their window using the hashtag #MumbaiRains. Mumbai Rains: Local Train Services Disrupted, BEST Bus Routes Diverted Due to Severe Waterlogging in Lower Parel And Other Areas.

While Mumbai had been receiving intermittent rainfall, there has been a gap with breezy sunny afternoons. The forecasting agencies have now said that this would be the second spell of heavy rainfall this monsoon. The rains are expected to increase tomorrow also, the intensity will start declining only from August 6. Meanwhile, a landslide along the Western Express Highway in Kandivali has slowed down the traffic. BMC took to Twitter informing that in the early morning, waterlogging has been reported at "Hindmata, Dadar TT, Sakkar Panchayat, SIES College, Goel Deul, Bhendi Bazar Junction, JJ Junction, Thakurdwar Naka, Shanmukhananda Hall, Shaikh Mistri Dargah Road, Postal Colony."

Dadar TT today at 8 am. Pictures thanks to Rony. #Mumbairains #dadar pic.twitter.com/kfdVFoKoI7

I was ready and leaving for the office, However condition just outside my building doesn't allow me to attend the office 😑😣

#MumbaiRains when you wake up to see the road turned into water kingdom pic.twitter.com/azRr92IeWO

The India Meteorological Department (IMD) on Monday issued a red alert for Mumbai, Thane, Pune, Raigad and Ratnagiri in Maharashtra for Tuesday and said the districts will receive extremely heavy rainfall in next 24 hours. The weather agency has also upgraded its earlier rain forecast from "heavy-very heavy" to "extremely heavy".

(The above story first appeared on LatestLY on Aug 04, 2020 10:13 AM IST. For more news and updates on politics, world, sports, entertainment and lifestyle, log on to our website latestly.com).