The blue-eyed Pakistani chaiwala who caught the internet's eye in 2016, has now started his own cafe! Arshad Khan has acted in several TV shows and has more coming up. Meanwhile, he has started 'Cafe Chaiwala Rooftop', a cafe in Islamabad. He says that he named the cafe so, as he is known by the name. 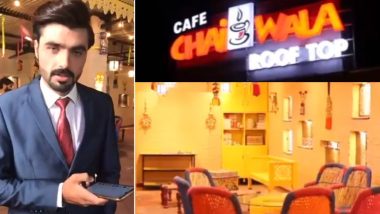 The blue-eyed Pakistani chaiwala who caught the internet's eye in 2016, has now started his own cafe! His good looks and the colour of the eye had made him the social media's favourite. While some hoped he become a model, others wanted him to pursue acting. Four years later, Arshad Khan has acted in several TV shows and has more coming up. Meanwhile, he also decided to keep his original profession alive. He has started 'Cafe Chaiwala Rooftop', a cafe in Islamabad. In an interview, he explained why he named the cafe so; he says that he is known by the name and wanted it in his venture's name too. 'Pakistani Chaiwala' Arshad Khan Has a Regret, Watch Him Making an Important Point (Watch Video)

He said, "A lot of people have told me to remove ‘chaiwala’ from the name, however, I refused because this is my identity." Pictures of Arshad Khan making tea at a tea stall in Pakistan had gone viral in 2016 after photographer Jiah Ali clicked and shared his photos online. Video of the cafe which is being shared widely features local furniture, truck art and Urdu scripts. It has a very vibrant touch and feel. Khan in the video can be heard saying that he is dividing time so that he can concentrate on his cafe and his television shows. This Tarboozwala From Karachi Who Girls Are Crushing Over is An Upcoming Doctor, View Pic!

As the video went viral, Twitterati praised him and his dedication to work. Most of them were quite delighted to see Arshad's accomplishment. Arshad Khan told Urdu News, "We have used truck artwork to design the café and also placed desi tables and chairs." The menu of the cafe includes 15-20 dishes apart from tea. He also talked about education and how he regrets not having completed his studies. However, he hopes to help people who want to study further.

(The above story first appeared on LatestLY on Oct 06, 2020 11:23 AM IST. For more news and updates on politics, world, sports, entertainment and lifestyle, log on to our website latestly.com).