Paytm Removed and Then Brought Back by Google App Store! Funny Memes and Jokes Take over Twitter as Netizens Grab a Popcorn 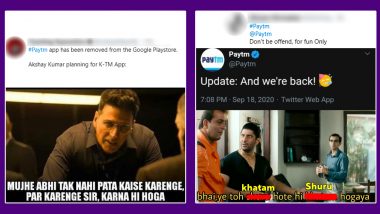 Yesterday, it came as a surprise to many netizens that Google Playstore had removed the popular digital wallet, Paytm for violating its "gambling policies". Paytm, that has over 50 million monthly active users came back on the app store, hours after being removed. However, it is the memers that cannot keep calm and Twitter is flooded with funny memes and jokes about Google Play store first removing and then bringing back Paytm mobile application.  While some joked about how short the duration was, some couldn't stop thinking about what could have happened for google to bring back the app.

"Update: And we're back!," Paytm posted on its official Twitter account after being removed by Google Play Store citing policy violations. Google said that the Play Store prohibits online casinos and other unregulated gambling apps that facilitate sports betting in India and Paytm, which has promoted a fantasy sports service, repeatedly violated Play Store’s policies. While that's a debate for another day, here are the funny memes and jokes you missed out!

Don't be offend, for fun Only pic.twitter.com/EHyK9RGN5d

Me who has 20₹ in my #Paytm wallet pic.twitter.com/eFAWsS0jAK

#Paytm app has been removed from the Google Playstore.

People having bank accounts and deposits in #Paytm will b like pic.twitter.com/5nfPqoOOl3

Paytm has apparently launched the 'Paytm Cricket League' on its consumer app for users to engage in their passion of cricket and get cashback. "The game allows users to get player stickers after each transaction, collect them and get Paytm Cashback. Cashback is legal in India and we strictly follow all rules and laws of the land. Unfortunately, Google believes this to be a violation of its policies and has unlisted the Paytm Android app from the Play Store," the spokesperson told PTI.

(The above story first appeared on LatestLY on Sep 19, 2020 09:11 AM IST. For more news and updates on politics, world, sports, entertainment and lifestyle, log on to our website latestly.com).