Ratan Tata, Chairman Emeritus of Tata Group, has clarified that he has not purchased 50 percent stake in "Generic Aadhar". 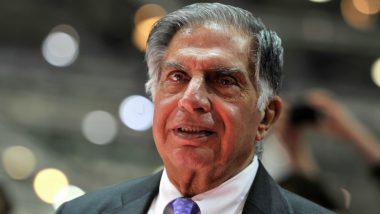 Mumbai, May 9: Ratan Tata, Chairman Emeritus of Tata Group, has clarified that he did not purchase 50 percent stake in "Generic Aadhar", a unique pharmacy retail chain promoted by 18-year-old Arjun Deshpande from Mumbai. There were reports that Ratan Tata has purchased 50 percent stake in the teenager's venture. However, the Tata Group Chairman dismissed the fake news, adding that he is supporting Arjun Deshpande's startup. Ratan Tata Again Calls Out Fake News as Rumour Mongers Quote Him as Saying That '2020 Is Year to Survive, Not to Make Profit'.

"As happy as I am to support this venture, it has been a minority token investment. I have not purchased 50% stake in the company," Ratan Tata tweeted on Friday, reacting to reports that said he became 50 percent partner of "Generic Aadhar". Unlike other online pharmacies, "Generic Aadhar" sells medicines at much cheaper rates than the market price, according to a report by Business Standard. Ratan Tata Dismisses Fake Viral WhatsApp Post on Impact of Coronavirus on Indian Economy Attributed to Him, Says Not His Views.

As happy as I am to support this venture, it has been a minority token investment.

I have not purchased 50% stake in the company. pic.twitter.com/RXbC5aabiB

While Deshpande confirmed that Ratan Tata has picked up a stake in his company, which he started two years ago. Further details about the deal, however, were not disclosed. "Generic Aadhar" now fetches Rs 6 crore annual revenue. According to the Business Standard report, Ratan Tata had made the investment at a personal level and it was not linked to the Tata Group. About 30 retailers from Mumbai, Pune, Bangalore and Odisha are connected with the startup.

Ratan Tata has invested in many startups in the past such as Ola, Paytm, Snapdeal, CureFit, Urban Ladder, Lenskart, and Lybrate. Since he arrived on Twitter, he has been dispelling various rumours doing rounds attributing to him.

(The above story first appeared on LatestLY on May 09, 2020 10:02 AM IST. For more news and updates on politics, world, sports, entertainment and lifestyle, log on to our website latestly.com).