Real Ghost Caught on Camera? Paranormal Encounter of Odisha Villagers With Eerie Figure in White Saree Is Giving Nightmares! Viral Video Will Spook You Out

A video is going viral on social media that apparently captured a ghost-like figure on the dead of the night in a remote village in Odisha. The paranormal encounter of the villagers with the unidentified figure in a white saree is giving nightmares. 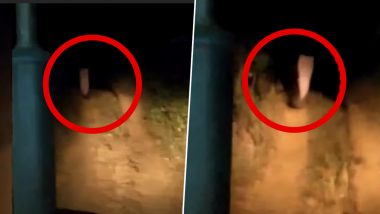 Do you believe in ghost? While scientists say there is no evidence that ghosts really exist, there are plenty of people out there who believe in these spirits. There are sh*t scary ghost stories that make everyone believe that paranormal activities are real; again, there are spooky encounters captured on camera, which gives nightmares. On a similar note, a video is going viral on social media that apparently captured a ghost-like figure on the dead of the night in a remote village in Odisha. The paranormal encounter of the villagers with the unidentified figure in a white saree is giving nightmares. If you haven’t watched the video yet, be prepared to get spooked!

A few days ago, a father shared horrifying footage of his daughter being pulled under the bed by a paranormal being. Again, at the start of the year, a ghostly figure was spotted behind a petrol pump in Raichur, sparking spooky assumptions. While none of the encounters was proved, the latest clip has surely become a sensation in the tribal-dominated district from Chikili village under Junagarh block of Kalahandi, Odisha.

According to reports, it was late night when the villager was travelling back to his home with some of his friends on a tractor this week. They encountered a human-like figure walking alone in the middle of the road, wearing what seemed like a white saree. In the shadowy video, the figure at first could be seen walking towards the tractor, leaving passengers in a frenzy. The passengers panicked and began screaming. Reports also note that some of them abandoned the vehicle, while the horrified driver struggled to restart the tractor. Meanwhile, the ghostly figure drifted away before vanishing into the bushes, lining the dusty road.

The authenticity of the video remains unclear. Whether it is actually a spooky figure, or a cloth, or someone pranking is not revealed, but the viral video is undoubtedly scaring people online.

(The above story first appeared on LatestLY on Mar 05, 2021 09:16 PM IST. For more news and updates on politics, world, sports, entertainment and lifestyle, log on to our website latestly.com).