Is That a Real Ghost? Father Shares Horrifying Video of Daughter Being ‘Pulled’ Under Bed by Paranormal Being

In the clip, the little girl can be seen moving about her bed, and eventually pulled under bed apparently by a paranormal being. Social media users are horrified as well as concerned for the child, urging the father not to let the child “leave your sight.” 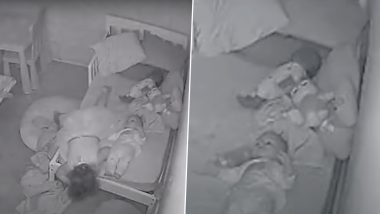 Are ghosts real? There has been a long-known debate if there are paranormal beings around us. Cultures all around the world believe in spirits that survive death to live in another realm. Whether you believe in ghosts or not, it is tough not to get freaked out when you are alone, and you hear something bump in the night or even hear a voice. Something similar appears to have happened to this little girl in the viral video—at least, that’s what her father insists. In the clip, his daughter can be seen moving about her bed, and eventually pulled under bed apparently by a paranormal being. Social media users are horrified as well as concerned for the child, urging the father not to let the child “leave your sight.”

Most of the people have their own ghost stories, and at times, such spooky moments are captured on social media that eventually goes viral. Last year, a picture went viral after a man’s paranormal sighting in his house. Again, there was a UK woman was eerily set to marry a spirit. Then there are many places that have haunted stories associated with them.

The video in question somewhat captured a creepy moment. The clip first shared on TikTok by Josh Dean, shows the little girl lying on her bed, and eventually gets out of the bed after the music starts playing, moving onto the floor and appearing to peer underneath. She then begins to move under the bed, but not necessarily in a crawling position, and starts crying out “mummy” repeatedly, as she seems to be dragged slowly under the bed. The TikToker revealed in the text on the video that his wife thinks she crawled under the bed, but that he believes “she was clearly puled by something.”

The moment captured on a baby monitor in the child’s room, was viewed by millions across the platform before it was shared on other social media sites, including YouTube. While a few people on the internet rubbished the father’s claim, others are spooked by the video.

Whether or not there is a ghost, the clip is creepy. There could be a possible explanation that the child was looking for a toy under the bed, and got hurt, which is when she screamed for her mother. But the parents also reportedly claimed that they tried to film under the bed but that the father’s phone malfunctioned when he attempted to view and post the footage.

(The above story first appeared on LatestLY on Feb 24, 2021 06:25 PM IST. For more news and updates on politics, world, sports, entertainment and lifestyle, log on to our website latestly.com).