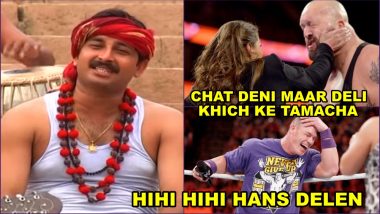 Manoj Tiwari has had a prolific career, be it as an actor, a singer or a politician. But the Bhojpuri star has suddenly become an online sensation courtesy a song, which he had sung way back in 2002. The super hit song is "Rinkiya Ke Papa". Yes, the song with crazy, catchy but super-fun lyrics – "Chat Deni Maar Deli Khich Ke Tamacha, Hihi Hihi Hans Delen, Rinkiya Ke Papa!” The Internet is full of mashup videos and memes based on Manoj Tiwari’s song. One of our favourites is “Rinkiya Ke Papa” WWE version. Bhojpuri Songs and Music Videos With Funniest (Atrociously Vulgar) Lyrics Will Make You Say WTF!

There is no shortage of drama in World Wrestling Entertainment (WWE). Something or the other is always cooking up in the professional wrestling space to entertain its devoted audience. And at the same time, you have Bhojpuri songs that are known for their energetic, unforgettable and foot-thumping music and lyrics. So just imagine what would be the end result when these two are combined to form a mashup version? MIND-BLOWING!!

"Rinkiya Ke Papa" WWE version is a well-made video, where the clips are in perfect sync with the audio lyrics. Especially those scenes where an angry female wrestler slaps another with the lyrics "Chat Deni Maar Deli Khich Ke Tamacha,” playing in the background. But the highlight of this video is John Cena who is shown laughing hysterically as well as dancing as "Rinkiya Ke Papa" song plays in full glory.

"Rinkiya Ke Papa" is a song from Manoj Tiwari’s 2002 music album, Uparwali Ke Chakkar Mein. While you may or may not remember how the audience received the album at the time of its original release, this song has suddenly become a rage at present. The success of "Rinkiya Ke Papa" shows the power of the internet in the current times and how anything and everything has the potential to go viral.

(The above story first appeared on LatestLY on Oct 25, 2018 07:07 PM IST. For more news and updates on politics, world, sports, entertainment and lifestyle, log on to our website latestly.com).