San Jose Man Falls 500 Feet to his Death While Hiking in Sequoia National Park; Woman Tumbles 30 Feet Trying to Save Him

A man fell off from the edge at Mount Russell inside the Sequoia National Park, California. The horrific incident took place on Monday. While trying to save the man, a woman also injured herself severely. 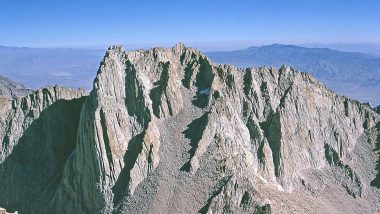 A 56-year-old hiker from San Jose fell 500 feet to his death in California's Sequoia National Park during a Memorial Day trek. According to the ABC News report, the horrific incident happened on Monday, when a hiking group consisting of three people was making their way along the summit ridge of Mount Russell in California's Sequoia National Park. The National Park Service said in a statement that while hiking a 56-year-old man from San Jose, California, suddenly lost his balance and fell off 500 feet to his death off the summit ridge of a mountain.

Unfortunately, while trying to save the man, another member of the group, a 45-year-old woman from Milpitas, California, ended up getting severely injured as she tumbled off 30 feet. However, she was able to save her life. The third member of the hiking group immediately called the emergency services from his mobile phone to report the accident and also used a satellite device locator light to declare an emergency. A helicopter crew responded to the emergency very quickly.

The National Park Service has issued a press release, which read as, "At the time that the call was received, Sequoia and Kings Canyon National Parks' Helicopter 552 and other rescuers were already engaged in rescuing an unconscious hiker from the Big Five Lakes area, so the search and rescue team and Helicopter 551 from Yosemite National Park responded to the Mount Russell emergency."

"The Yosemite technical short-haul team rescued the injured woman from the ledge and transported her to Bishop, where she was admitted to the Northern Inyo Hospital. Later, she was transported by air to a hospital in Reno, NV, where she underwent surgery," they added. The authorities also said that the 56-year-old man’s body was recovered and transported to a funeral home.

There were around eight separate search-and-rescue incidents that happened over Memorial Day weekend, according to the National Park Service. "There is never any guarantee that rescuers will be able to reach you quickly. Understand your own limits, take care of the people in your party, and always be prepared to turn back," they stated in the press release.

(The above story first appeared on LatestLY on Jun 03, 2021 05:43 PM IST. For more news and updates on politics, world, sports, entertainment and lifestyle, log on to our website latestly.com).