Following significant criticism online for promoting anti-Semitism, the fashion brand pulled the item from its website and also issued an apology. The latest outrage came after Shein was slammed for selling Muslim prayer mats as ‘fringe trim carpets.’ 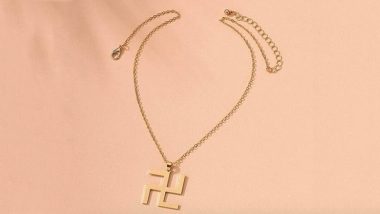 Fast-fashion retailer Shein once again made the headlines for stirring massive debate online after it sold ‘Metal Swastika Pendant Necklace.’ The necklace was reportedly on sale for $2.50. Many people on Twitter and Instagram, took a screenshot of the product and shared it online, slamming the brand for selling it. The reason why people were furious about it, was because it appeared as Nazi symbolism. Following significant criticism online for promoting anti-Semitism, the fashion brand pulled the item from its website and also issued an apology claiming that it was not a Nazi symbol. The latest outrage came after Shein was slammed for selling Muslim prayer mats as ‘fringe trim carpets.’ TikTok, UC Browser Among 59 Chinese Apps Banned by Govt of India Amid Row With China, See Full List.

The swastika is a symbol of divinity and spirituality in many Indian religions. Again, in the West, it denoted good luck until the 1930s. The right-facing titled form became a feature of Nazi symbolism as an emblem of the Aryan race. The emblem was a black swastika rotated 45 degrees on a white circle on a red background.

An Instagram page, called ‘Stop Antisemitism,’ posted a screenshot of the necklace and wrote, “we demand that #shein IMMEDIATELY remove this item from their website as it represents the mass murder of millions.” According to reports, less than an hour after the post was uploaded to Instagram; the necklace was removed from Shein.

Thousands of users took to social media expressing their disgust over the company. While some argue that the symbol stems from religions such as Buddhism and Hinduism, the majority of commentators disapproved. They pointed out, how the symbol was largely associated with the Nazis, who adopted the icon as an emblem of their fascist regime.

Here Are Some Reactions

THREAD: Earlier today I saw that a popular retail website called Shein is selling a "Metal Swastika Pendant Necklace". As a Jewish American woman, I was appalled to see this symbol of hate being sold as fashion. What appalled me even more is the overwhelming number of people pic.twitter.com/uz6Ea0Gwjk

Some Also Pointed Out the Prayer Mat Backlash

I understand. But after the prayer mat backlash, @SHEIN_official *literally* said they formed a "product review committee consisting of staff from different cultures and religions to prevent something like this from happening again."

Following major criticism, “We are very sorry. The necklace was originally sold as a Buddhist symbol rather than the Nazi swastika which is pointed in a different direction & tilted at an angle. Nevertheless, we want to apologize for the confusion, & anger this has caused & have removed it from our site,” tweeted Shein. The company, which is famous for selling trendy outfits at cheaper rates, also took to Instagram to issue an apology.

To our community💌 We’re sorry.

Shein, which is headquartered in China, adds 500 new products to its website every single day. Products advertised on the website are curated and sold by the fashion retailer itself. Recently, India banned 59 Chinese apps over security threat, and Shein was also among them.

(The above story first appeared on LatestLY on Jul 10, 2020 07:40 PM IST. For more news and updates on politics, world, sports, entertainment and lifestyle, log on to our website latestly.com).