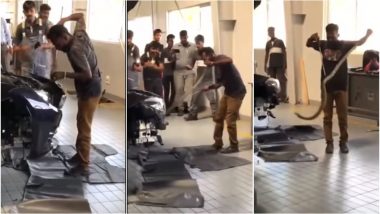 A video going viral on social media shows a six-feet-long cobra gliding out of a BMW car. Two businessmen from Tiruppur were driving to Madurai on Thursday when a snake entered their BMW 3 Series 320d GT. They called the firemen who searched the car but couldn't find anything. The men then called a BMW service centre and were told that it is so safe that "not even an ant could enter." However, the snake decided to make an appearance again scaring them. Not wanting to take another risk, they drove to BMW service centre. With no way out, they called a professional snake handler.

The video shows a blue BMW with its front tyres removed, front bumper pulled apart and hood up. In the clip, the man can be seen holding the snake's tail in his left hand. He tries hard to bring the snake out which is stuck under the bumper and in the process has to dismantle a little to bring it out of its hiding. With a little help, he pulls out the snake which falls to the floor. Sanjai, the conservationist can be seen handling the snake with care and calming it. Rare Cobra With Shining Red Hood Spotted at Chikmagalur Farmland in Karnataka, Watch Video.

He was disappointed that the snake was beaten up. The News Minute quoted him as saying, "The employees hit the snake. So its bones were broken and it went inside the bumper because it was in pain. So they pumped air into it. The snake started hissing. This confirmed that the snake was there. So the frontage of the car was removed. Then the cobra raised its hood and stood on the bumper. We safely removed it and released it into the wild after informing the authorities, since it is venomous."

(The above story first appeared on LatestLY on Nov 11, 2018 08:10 PM IST. For more news and updates on politics, world, sports, entertainment and lifestyle, log on to our website latestly.com).