A video of someone dipping an idli in tea has surfaced online and Desi Twitter is not impressed. This year, we have seen enough of weird food combinations and looks like there is no stopping this bizarre trend. 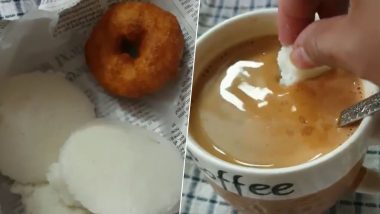 Idli Wada has become a common breakfast dish in India. And of course, tea or the more commonly refereed Chai. But mixing the two together and eating, why? That's exactly what people on Twitter are asking after a video of someone dipping an idli in tea has surfaced online. This year, we have seen enough of weird food combinations and looks like there is no stopping this bizarre trend. Every few days, we have pictures of some most distinct foodstuff being together, like oranges in Maggi or a Gulab Jamun on Pizza!

Reddit India has shared a short clip on their Twitter account which shows a person dipping a piece of idli into chai! The video, like other food combinations, is also likely to go viral. On Reddit, it reads, "Hello, I'm new to India. I hope I'm doing this right." No no you are not. Are you too squirming with the thought of how it would taste? Well, you are not alone. A lot of people have commented in the same vein. After Kaju Katli - Ketchup Combo, Gulab Jamun Pizza and Kurkure Milkshake by Desi Twitter Are Out to Ruin Your Foodgasm.

Any Reasons For Such Behaviour?

God would be Unkind on You!

God is kind but not to these people https://t.co/3TyHTbYmZ1

My eyes are burning. https://t.co/TYxvKkC3MA

Most people gave a very displeased reaction but there were a few who mentioned they have tried it and it is actually yummy! Want to give this combination a try then?

(The above story first appeared on LatestLY on Dec 29, 2019 09:58 AM IST. For more news and updates on politics, world, sports, entertainment and lifestyle, log on to our website latestly.com).