Imagine the horror to find a six-foot-long python resting in a child's bed! The incident took place in Queensland when a family found a large serpent resting over a child's bed, enjoying the warmth of it. 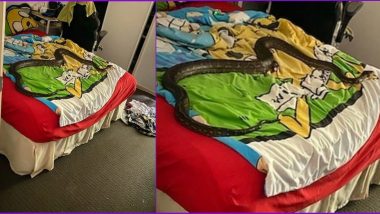 An appearance of serpents anywhere around can be so creepy. Be it in garden, bedroom or worse in a toilet. People have nightmares of seeing snakes in their sleep. Imagine the horror to find a six-foot-long python resting in a child's bed! The incident took place in Queensland when a family found a large serpent resting in the children's room. To much shock, it wasn't just in the room but over the bed, apparently feeling the warmth of electric blanket that was put on. The snake catchers were called in for the rescue who helped take this carpet python out. Picture and video from this snake rescue have been shared online. Just last week, two male pythons had managed to break through a ceiling of a home in Laceys Creek in Queensland. The two snakes were apparently fighting over a female.

The incident took place in the rural town of Beerwah in Queensland, Australia. The Sunshine Coast Snake Catcher uploaded a picture and video of the snake on their Facebook page. It was a carpet python of about six-feet-long. The weather was rainy and it came into the house to feel the warmth. "He was also enjoying the warmth of the electric blanket that was on haha," they wrote in the caption. Australian Mother Almost Dies After Getting Bitten By Venomous Snake In Sleep, Which She Thought Was Her Dog!

Watch Video of The Snake Rescue:

It's just amazing how easily the snake catcher just picked it up and put it in the bag. The family did not seem to really panic at least in the video. As they can be heard, the child was at the school when the catcher arrived, or he would be pretty freaked to see the serpent slithering on his bed. The rescuer mentioned that the bed was much warm and the snake was probably too comfortable there. He was let out into the wild later on.

(The above story first appeared on LatestLY on Sep 08, 2020 05:25 PM IST. For more news and updates on politics, world, sports, entertainment and lifestyle, log on to our website latestly.com).