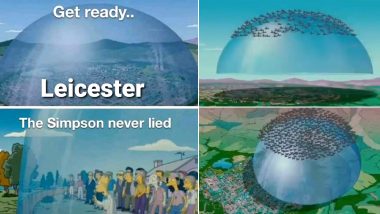 How many things can The Simpsons predict? The famous American sitcom is known for rightly foretelling the future at many times, more so in 2020 as people have experienced. Now, there's another one. Okay, not exactly but the people in Leicester would like to believe so. As the coronavirus cases are on the rise, lockdown situation jas been reimplemented at many places around the world. For the residents of Leicestershire city in England, there's a boundary to abide by in the lockdown. The boundary idea is now being compared to the glass dome which is shown in The Simpsons Movie. Someone made a video comparing the situation to from the movie scene and people cannot unsee it. The Simpsons Predicted Murder Hornets? Netizens React to The Coronavirus Prediction Episode Showing Killer Bees (Check Tweets).

As per The Simpsons Movie, the town of Springfield is closed from the rest of the world by sealing the people in a glass dome. In present-day Leicestershire, County Council produced a map to show the boundaries of the lockdown zone. Almost the entire city has been put in lockdown but the boundary has created confusion among some residents. This boundary is reminding people of the dome from The Simpsons Movie. So when a Twitter user made a video of the same scene relating it to Leicester lockdown, one couldn't just unsee it. The Simpsons Predicted Coronavirus Outbreak? A 1993 Episode Resurfaces Online With Fans Pointing Similarities to the Current Global Crisis.

How the Boundary Feels

The Simpsons Predicted This Lockdown

It's pretty impressive how the series and movie both have given situations time and again for people to relate to reality. A very recent prediction that came true from the animated series was the lights out at White House in June. The lights at White House were switched off following the violent protests surrounding George Floyd's death. Something similar was shown in the animated series. A lot of people thus look up to the series for making guesses about the future.

(The above story first appeared on LatestLY on Jul 02, 2020 01:49 PM IST. For more news and updates on politics, world, sports, entertainment and lifestyle, log on to our website latestly.com).