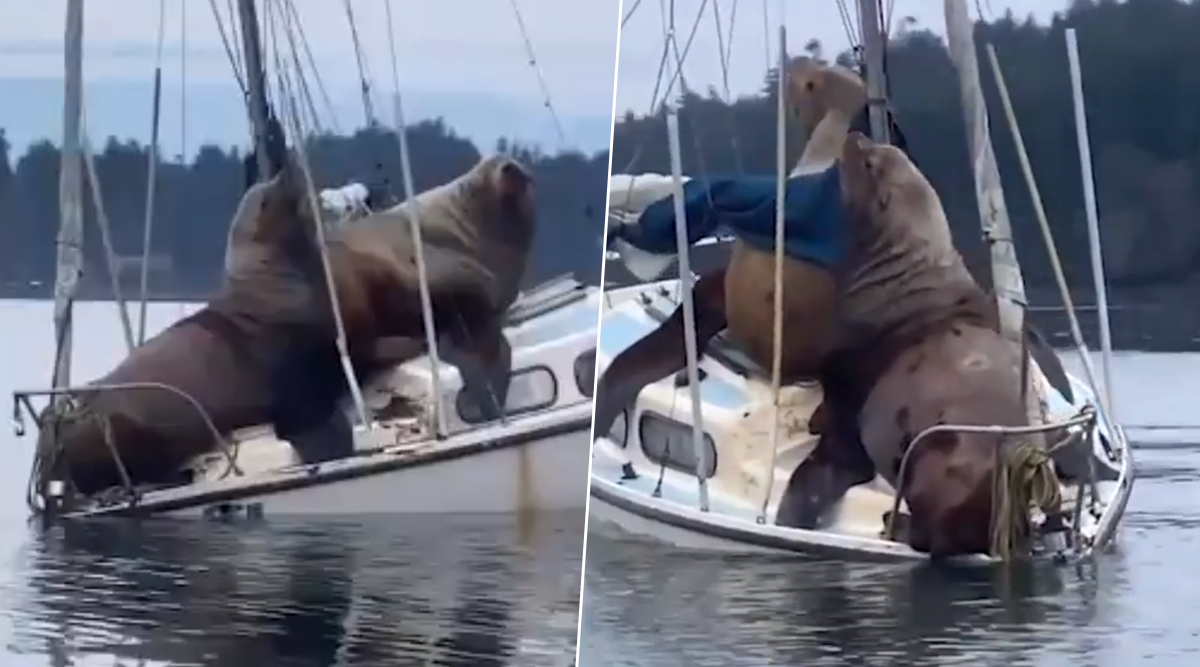 People who live in the Pacific Northwest in North America get to see all kinds of sea life. From dolphins to seals to the humpback whale, orcas and plenty of sea lions. Usually, those sea lions are spotted resting under the sun or swimming in Puget Sound. But these sea animals seem to have upgraded a little. Spotted enjoying a joy ride on a borrowed boat, which nearly sinks, these two giant sea lions are taking the internet by storm. The pair reportedly was sailing through Eld Inlet near Olympia on a boat. And this is not just it; another video surfaced on the internet that shows a third sea lion, struggling to get on the boat to enjoy the ride with the pair. Is This Sea Lion the Most Photogenic One Ever? Twitterati Have Mixed Responses.

According to reports, the video of the sea lions aboard was taken by Joshua Phillips and posted on his company’s Instagram page called Spawn Fly Fish. In an interview with the Olympian newspaper, Phillips explained that the vessel “looked a little off, and we got closer and closer and realized there were two massive animals on board.” Meanwhile, another person posted a video from the shore that shows a third sea lion trying to get on the boat too. Bear Relaxing in a Hot Tub Drinking Margarita in California.

The sight is adorable, yet hilarious. The clip was later shared by Washington State Dept. of Natural Resources on Twitter. We wonder how the people, riding the boat, might have managed to give the animals a joyful ride, they wanted.

It may not be a boating season for many of us, but for these sea animals, for sure. And the casual expression on the sea lions’ faces, as if they own the boat cannot be ignored. Both the videos have later been taken to other social media platforms, earning enough views and likes. This is how, we all should be chilling in summer!